The Film receiving the most nominations is The King’s Speech with eight, including Best Film, Best Director, Best Screenplay, Best Actor and two Best Supporting Actor nominations. Monsters, Never Let Me Go and The Arbor all received six nominations, Four Lions five and four nods went to Another Year, Made in Dagenham and Brighton Rock.

Emelie De Vitis, Marketing Manager Moët & Chandon commented: “Moët & Chandon is delighted to be supporting the Awards in a year where the talent pool is so strong. As the champagne of film and cinema, Moët & Chandon looks forward to celebrating the success of all nominees and the British Independent Film industry with glasses of Moët & Chandon at the glamorous awards evening on Dec 5th." 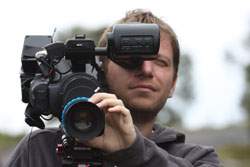 Newcomer Gareth Edwards receives an impressive four nominations for his directorial debut Monsters; categories include Best British Independent Film sponsored by Moët & Chandon, Best Director, The Douglas Hickox Award for Best Debut Director and Best Technical Achievement. Both Andrea Riseborough (Brighton Rock) and Manjinder Virk (The Arbor) are nominated in two categories, Most Promising Newcomer and Best Actress, with The Arbor also competing for Best British Documentary alongside Enemies of the People, Exit Through the Gift Shop, Fire In Bablyon and Waste Land.

The Raindance Award nominees for 2010 include Brilliant Love, Legacy, Son Of Babylon, Treacle Junior and Jackboots on Whitehall. This Award honours exceptional achievement for filmmakers working against the odds, often with little or no industry support. Elliot Grove, Founder Raindance Film Festival and BIFA added: "The nominees for this year's Raindance Award show how vibrant and strong the state of independent film is in this country, despite the economic uncertainty. I am thrilled that we are able to support such great films, and know we'll see many more in the coming years"

The Pre-Selection Committee of 70 members viewed nearly 200 films, out of which they selected the nominations, which were decided by ballot.

The winners will be announced at the much anticipated 13th awards ceremony which will take place on Sunday 5 December at the impressive Old Billingsgate in London and will be hosted for the sixth year by James Nesbitt.

BIFA are proud to announce the following nominees for this year’s awards: