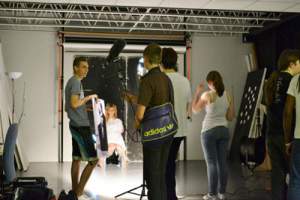 More than 30 schoolchildren aged 15-17 made the most of the summer holidays by taking part in a free two-week project at UCA Rochester where they produced three short films.

Each episode of the sci-fi series Mechanical Me, which explores Medway’s secret past of android development, will be uploaded to YouTube for the world to see over the next three weeks.

Film director Nirpal Bhogal said: “I think this Summer School is a fantastic idea and a great way for young people to have their first taste of filmmaking.

“It’s so easy for people to watch TV or film and think that they could do better but most don’t understand the limitations involved.

“Part of the journey of becoming a filmmaker is learning what you can do with the resources you have and this project is great at teaching this at a really young age.”

Summer School student Chris Spice said: “I really enjoyed the project and I’m really pleased with how it all turned out, considering we’re all young and relatively inexperienced filmmakers – it looks as though we’ve made a really professional film.”

Fellow student Edward Smyth said: ”I think all three episodes turned out really well. We had some creative difficulties at times but overall it was good, enjoyable, interesting, funny and at times serious – so, a really good mix.”

The Summer School was organised by UCA and Viola Films to give young people an insight into what a career in film might be like.

Loreta Jarvis, UCA Summer School co-ordinator, said: “We’re delighted to give young people in Kent a taste of what creative courses at UCA are like and hopefully encourage them to look into studying here in the future.

“Four graduates from UCA have gone on to win Oscars and Gareth Edwards is remaking the new Godzilla film for Hollywood, so we hope the film Summer School inspires someone else to follow in their footsteps.”

BBC producer and Creative Director at Viola Films, Sam Supple, said: ”Everyone single person on the Summer School put so much effort into every aspect of these films. I think there was some amazing talent on show and we may have spotted some future filmmakers here.”

The three Mechanical Me films will be uploaded to www.youtube.com/mechanicalmeseries over the next three weeks.