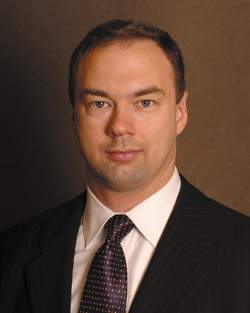 With Pacific Rim, and Godzilla in the pipeline, who at your company really loves the giant monsters?

THOMAS TULL: That would be me. [Laughs]

Can you tell us about the development process on these films?

Pacific Rim started with Travis Beacham coming in and pitching us a story that we thought was pretty cool, which had not only giant robots and monsters, but had great characters and a science fiction bent to it because of the way the pilots had to communicate in the pods and share consciousness.

Godzilla is something that I’ve loved since I was a kid and wanted to see. We wanted to make a movie that we wanted to see as fans. So I think you’ll find that that’s a very different tone. Pacific Rim is a world that’s been created, along the lines of an Independence Day; you know you’re in a movie. And Godzilla will certainly have a different take on the world than that, we think – Gareth Edwards is a great young director – that audiences will really like it.

Pacific Rim sort of harkens back to all of those big monster movies that we all grew up with. Is that what you set out to do with this so that you could have universal appeal?

Yes, from the standpoint of wish-fulfillment. When Guillermo and I sat and talked about this idea that if you’re twelve years old and you looked at these Jaegers and you and your friend or family member had to go pilot these things, fight monsters and save the world, I just thought that was awesome. So, that really was our desire from the beginning, to tell a story that had universal appeal that everybody could understand. The globe has to come together for a common cause, and I also kind of love the idea that everybody thought the invasion would come from up there, and instead it came from underneath. And then it was the opportunity to work with Guillermo del Toro.

At what point did you bring him into the project?

He was working on a movie called At the Mountains of Madness and he was our first and only phone call. At first, it looked like we’d have to wait for him, and then that fell out. So, in this case, it was great that the person that you wanted to direct it said yes. So, we brought him in after we had developed it and he just jumped in and helped to write it and to shape it from the beginning.

Did all that happen in just a few days?

It was pretty quick, because we had certainly been talking, and we know each other and wanted to work with Guillermo. So, in this case, I told him, 'You don’t have time to mourn.' 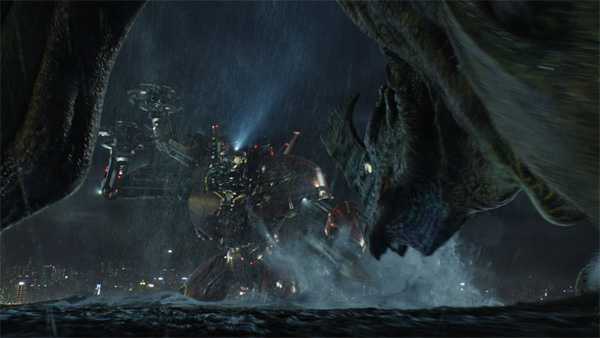 Well, I’m a huge fan of Godzilla and that whole universe. When I was a kid, where I grew up, on the day after Thanksgiving, they would show like all day, Godzilla movies, King Kong movies, Mothra, Ghidora, everything. So, those certainly had an influence. But Guillermo very definitively said to his design team, 'Don’t make this derivative. Let’s come up with creatures and let’s come up with Jaegers, the robots, that work.' And we also worked with Carnegie Mellon University, which has an outstanding robotics department, on how we could ground some of the robotics and make sure that that’s going on.

Was there any inspiration that was being drawn from like real life robots, like ASIMO and all the ones that we can actually see working in real life?

Well, we had our writer talk to the folks in the robotics department at Carnegie, to ask, 'Okay, how would these strands actually work? What would these weight ratios be like? How far are we going?' And we even obsessed about how fast, if this really happened, could the world’s resources be used? Like with World War II, it was: how many aircraft carriers could you turn out? We went through all kinds of research to try to make it science-plausible, if not science-fiction.

Well, New York gets picked on all the time. And there are so many amazing landmarks, both in terms of the topography of San Francisco and just things that you recognize right away, that we thought it was their turn in San Francisco. So, we love what was shot here, in terms of the backdrop and the battles that you got to see. And the Golden Gate Bridge being taken down by the Kaiju is one of my favorites. So, it was just a great place to have as part of the movie.

How important is it to do something completely original, no sequel, no other existing brand name attached to it, in addition to the other projects that you do?

Personally, I think it’s very important. I mean, one of the chief complaints I hear from fans is that nothing new ever comes out of Hollywood. And whether that’s a fair criticism or not, it’s certainly on their minds. So, to be able to create a world from scratch, you hope audiences will connect with it, and when we tested it, they certainly seemed to. I think, at least for us, we don’t ever want to be in a position where we say, 'No, we’re not willing to make a big movie unless it has these elements.' If it’s got a great story and you can team up with an amazing filmmaker like Guillermo, then it’s something we want to be able to do.

Can you talk about the decision to convert the film into 3D and about your thoughts on 3D films in general?

It really depends on the film itself, if can enhance the experience or not. Inception came out and was a 2D film. That was Chris Nolan’s choice. And, in this case, Guillermo did not want to shoot in 3D because of some of the things that he felt were limiting. Then we were approached in post by one of the production houses who said, 'Can we convert a scene and show you?' So I called Guillermo and said, 'This is up to you.' We watched the scene together, and thought it was amazing.

I think it’s pretty great in 3D. So, that was Guillermo’s choice and to me, it’s all to me about choice, right? This movie is available in 2D or 3D, so the audience can choose, but I think the experience in 3D on this particular movie is pretty great.

Can you talk about how the fan community is sort of shaping the landscape of Hollywood?

Well, for us, next year will be our tenth anniversary and that’s always been our thing. We make movies we want to see as fans. You’ve seen the power of that group in terms of the ones that are enthusiastic and go out and buy the toys and the DVD, so I think they’ve got a very loud voice. For us at Legendary, it’s really always the audience that we connect with and if the thing started spinning the other way, that it was all about romantic comedies as tent poles, then I guess we’re in trouble because we don’t know how to do that. We just make stuff that we like and hope that others do too.

If you have the hubris to start thinking you know what you’re doing, you’re in trouble. Each new movie is its own thing, so even if you had a string of hits, that doesn’t mean that tomorrow’s will be. So we try to be fiscally responsible, but yet, at the same time, make things that are incredibly compelling. And, lastly, if the words ever come out of my mouth, 'I don’t really care about this movie, but it’s a good piece of business,' then we want to go out of business. If we’re not excited about it as fans, then we shouldn’t be making it.

Pacific Rim is in cinemas from July 12.