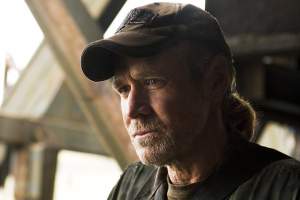 Falling Skies is one of a number of alien invasion/post-apocalyptic films and TV series that are around at the moment. Why do you think there are so many of them?

I don't know, man. I've been thinking about that too. I keep seeing these ads for all kinds of things in that vein. Do people feel that the world is in danger of falling apart? Is this a way of manifesting our fears? Is it a longing for some mysterious other? I don't know. Perhaps many people feel a little on edge and having to survive in a different way, but that's probably always been the case.

The thing with science fiction is it has always been about addressing things that are going on in the world but put into a different setting and context.

Yeah, that's why I often enjoy it.

Were you pleasantly surprised that Falling Skies has made it through to three seasons, given how the networks often axe sci-fi shows mid stride.

Well yeah, but it's kind of hard to predict what's going to do it and what's not. I definitely wasn't expecting to be doing it this long. But here I am and I've come to quite enjoy it, and enjoy the people, and I'm pretty well entrenched in there now.

As you get older do you find you get given more of these grizzled characters to play?

It's funny you should say that. I've got this busted up finger that I caught in something doing a movie a few years back, and it's not quite healed. And I'm missing a tooth, so I have one that I can put in for certain parts. I have a way that I can fix my finger so it looks more elegant. I realised I've had one or two in the past five years where I've need that finger and that tooth. There's not really any reason for any of my characters to have all their teeth any more. Or elegant hands.

But you do have a good head of hair in this show.

That's because, when I went to do the pilot I was doing this movie called Meek's Cutoff right afterwards, and I wanted long hair for that because I was playing a pioneer in the 1850s, so I had to keep the hair to do the movie, which is how this unexpected look of Weaver's came about. The ordinary idea would be to shave the head, but because I had to do the movie he ended up with this hairstyle you wouldn't expect, and I kinda like it now.

If you were in a situation like that, you would either somehow keep it shaved, or let it go. It's not as if you can pop down to the hairdressers for a shampoo and styling.

That's right. But who knows, maybe he'll cut his hair at some time. I know Dale Dye, our actual military guy, who I love, is always going, "When you going to cut your hair, Patton?"

We see in most of these post-apocalyptic films nowadays that the solution always seems to be a violent, militaristic one, where everyone has guns and is aggressive. Yet in the classic sci-fi from the '50s and '60s it was the scientists and academics that found the answers.

Yeah. I prefer that. Although running around doing all the physical stuff is a lot of fun. In fact, I was just talking to someone and they asked me how would I react in the same situation, and it would be a lot different than Weaver's. Mine would be: what is this? Let me look at this, see what it is; listen and be hopeful and open. That would be my first reaction, but it's not Weaver's.

Because he's a military guy.

There's also a lot of revenge running through his blood with what happened to his family, which always colours things.

In the second season, which is out now on DVD, we see a softer side of Weaver come out.

It helps that he finds his beautiful daughter. She comes and that cracks his rock of a heart a bit, although there's a lot further to go. He's still got his armour on. He's wearing that mask and that armour, but you see little cracks.

Was it a pleasant change to play that extra dimension rather than just barking orders and being disagreeable?

Oh yeah, and that's what's great about the character is there is so much excavation that can be done on him. Every time you see something like that, it means something. It's not something that comes easily.

Do you come from a stage background, or have you always been a screen actor?

Do you still do stage work nowadays?

I do, but I only do it if I love it so much that I'm willing to die for it. I don't have patience for anything in the theatre unless it means the world to me, and I can't help but do it. It lasts longer, although not longer than a series, but eight times a week you've got to love it.

But having constant screen work must allow you the luxury of doing a stage show every now and again?

There was a bunch of stage stuff that people asked me to do this year but I didn't quite find the right one yet, but I imagine I will.

So what else have you been doing?

I was just in Serbia, shooting a film in Belgrade. I was working with a director I worked with years ago named Roger Donaldson, on a film called No Way Out. This new movie is called November Man, with Pierce Brosnan and Olga Kurylenko, and it's a thriller based on these old espionage novels about this spy named the November Man.