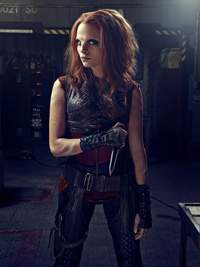 Since we spoke last year about the first season of Defiance, has your Irathient improved?
It's getting there. It's definitely improved as Irisa had some quite fiery lines this season, so it had to improve quite quickly.

At the end of Season One, Irisa's story was getting a lot darker. Without giving too much away, does it get more sinister?
It has indeed – and for all the characters. The whole show has got a lot edgier and darker: grittier is the word. Defiance isn't quite how we left it in Season One.

We enter Defiance this time and the E-Reps (Earth Republics) have taken over, and the way it is shot is a lot edgier. It's not the Defiance we remember from Season One.

Do you think that is a good thing?
I do. Season One introduced the characters and helped us to get to know who they all were, and what Defiance was all about.

The second season slipped the board and allowed us to be a bit more liberal with it and take it into a lot of different places, which I think was necessary and kept it interesting.

We were able to do that in Season Two because we knew all the characters and the town of Defiance.

In the first season you build empathy with the characters…
Then we take it all away when we've just built their trust.

There's quite a lot of twists and turns that people won't expect, with each character actually.

We do get some new characters appearing this season, which really shakes the town up.

What's happening with the game?
There's a few characters from the series that are entering the game this time, so the game is still continuing alongside the series, with competitions and things.

One of the competition winner's characters got to come on set and be in the show for the second season, which was really cool.

They created a character for the show. There'll be more of that in Season Two.

You've also been working with Dave McKean again.
We actually shot Luna a little while ago, but it lost its budget. It's all been put back together now and will be doing its round of the festivals starting with Toronto. I love working with Dave. His work is so unique and special, and it's always a joy. 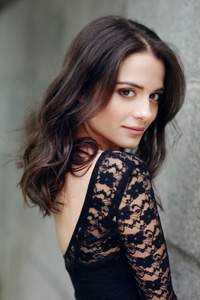 It's been nearly ten years since MirrorMask. Have a lot of things changed in the way you and he work together?
With Luna, we shot it quite a while ago – about five years ago.

So I feel like I'm due to work with him again and I'd love to experiment, being that bit older, and take it in a new direction.

It's so liberating working with Dave because there is so much freedom on the set. Knowing his work more and more, it feels so exciting to be part of it. I love working with him.

Is the story as fantastic as MirrorMask?
It is. Obviously it's a different story, about two couple meeting up together. One couple's recently lost their child and they're dealing with that. They deal with it through the fantasy world, where they enter this dark fantasy whilst they meet up in this house.

So it's a seamless blend, like Dave always quite magically works into his films.

It's obviously more of an adult story than MirrorMask, but it's still the same elements of the fantasy and real life, and figuring out the boundaries between both.

Do you like working in feature films, or are you happy with TV? It seems like everyone is working in TV these days.
There's some great TV out there. TV's really changed over the last few years with some incredible series out there that have really turned TV around. As long as the project is an interesting one and something you can really get your teeth into, it doesn't really matter if it's TV or film. It's more about the story and the scripts. It's changing quite a lot. 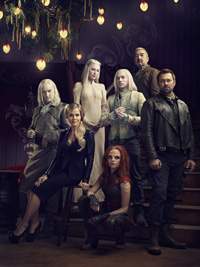 With TV you do get more time to develop the characters.

Definitely, especially with a long-running series. Even doing Defiance for two years, it's quite new to me to be able to take this character on a two-year journey. You don't often get that privilege. It's opened up a whole new world.