The movie industry has enjoyed and endured great changes in over the past century and continues to be shaped and defined by technology. Though the videogame industry isn’t yet 40 years old, it too has richly developed to become a mainstream form of entertainment. No longer are videogames predominately played by teenage boys hidden away in their bedrooms as smart devices have changed the games landscape forever. Players of all ages and gender are playing high quality games on the go, usually for under £10, delivered by the humble solo indie developer to major publishers like EA, SEGA and Ubisoft who are increasingly targeting the ever expanding numbers of casual to mid-core gamers. 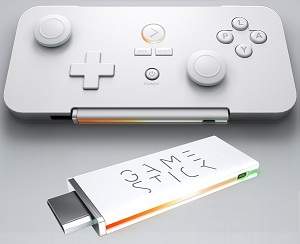 Announced this week, GameStick – a portable TV games console – is aiming to change the industry once again by redefining what social gaming is all about and bridging the gap between the console and mobile experience. A small yet powerful device, GameStick is a fully-fledged gaming console inside a flash drive that plugs directly into a TV HDMI slot and connects with a specially designed Bluetooth controller. When on the move, the flash drive can be neatly slotted into the controller to create a single unit that can be taken, games and all, anywhere you like and played on any television you like. GameStick will be compatible with other Bluetooth controllers enabling true multi-player functionality whilst the average cost of a game is expected to be a few dollars with most free to play and around 200 titles are being optimised to run on large screens, ready to be available at launch in April.

GameStick is a product by PlayJam who will use its custom built-for-TV technology to power the GameStick's purpose-built game store where players will browse and download content as well as connect and interact with the GameStick community. Considering PlayJam are already connected to 50 million homes around the world and that there are over 1,416,338,245 TVs in the world (of which less than 1% of them are used to play games), that’s one mighty big gaming network!

No wonder that when PlayJam looked to KickStarter to fund production of GameStick, they smashed their original $100K target in just 30 hours and have gone on to raise $648K. “We are overwhelmed, excited, grateful, thrilled and everything in between.” says Anthony Johnson, CMO, PlayJam. “The campaign has been an incredible success with support from thousands of backers worldwide but this is just the beginning. The feedback from the Kickstarter community has been invaluable in shaping the final product and we will continue to seek input from those that supported us to ensure continued innovation ahead of a global retail launch.”

Imagine being able to take your fave sci-fi movies anywhere you liked? For now, it’s little stick meets big screen as games are on the move. For more information, visit the GameStick website.