Free 3D movies courtesy of Nintendo and the BFI

As part of its on-going partnership with the BFI (British Film Institute), which was successfully inaugurated at last year’s 56th BFI London Film Festival, this month, Nintendo are offering 3DS and 3DS XL owners an exclusive opportunity to see two pioneering and influential films, A Solid Explanation (1951) and Eye On The Ball (1952) as they were originally intended, in stereoscopic 3D.

Available to view for free via Nintendo Video, these films have been preserved in the BFI National Archive since they were first screened in the early 1950s. After being restored to their former glory they offer a fascinating glimpse into some of the earliest steps into the world of 3D cinema, from over 60 years ago.

A Solid Explanation was produced especially for the Festival of Britain in 1951, and gave many attendees their first exposure to the new medium. Presented by the mirthful Desmond Walter-Ellis, it used footage of London Zoo’s exotic animals to introduce the audience to “the theory of stereoscopic transmission.” Sports documentary Eye On The Ball, meanwhile, used the 3D format to demonstrate the rules of a number of popular ball games. Transporting viewers back to the long shorts and knee high socks of the 1952 football league and the gentlemen’s googlies of a classic English cricket match, Eye On The Ball is a nostalgic adventure in time travel in 3D. 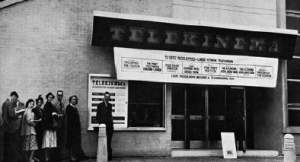 "The BFI commissioned the first ever programme of British 3D short films in 1951 to promote innovative advances in film production. Shown at a futuristic cinema on the Southbank – the Telekinema, the forerunner of today’s BFI Southbank venue, the screenings were an enormous hit. Audiences queued around the block to don special Polarizing glasses and experience the stereoscopic sensation" said Jan Faull, BFI Archive Production Curator. "Now, 60 years later, these films are about to astonish a new generation, viewing them on Nintendo 3DS. The incredible thing is that no glasses are needed."

Shelly Pearce, Director of Marketing and PR at Nintendo commented "We are proud to be working with the BFI to launch such historical 3D content via SpotPass on Nintendo 3DS and bring two unique films to a new audience."