Reading emails en route to meetings, describing sandwiches at lunchtime on social network sites, writing copy at hot desks, cutting a movie, coding games, checking out the latest news on SFL then settling down with a game or movie in the evening has become part of a daily routine for many. With a plethora of choices on the market, when buying a device to keep up with this routine, the decision of whether to invest in a bulky power hungry laptop or sacrifice power for a light weaker mobile option now seems redundant following Razer’s announcement of The Blade – the World’s thinnest laptop. And by thin we’re talking thinner than a dime! 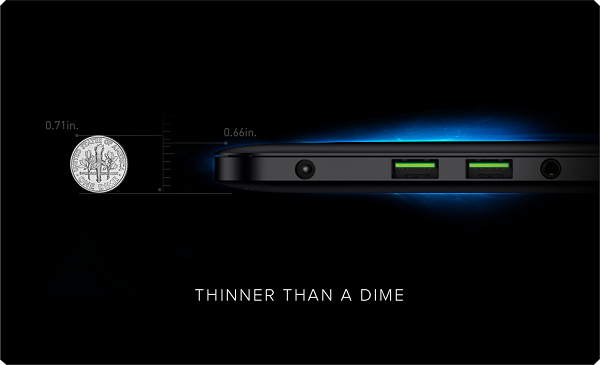 Offering users a balance between owning a massively powerful gaming machine that’s combined with a creative mobile studio that is also lightweight, the super-fast 14-inch Razer Blade is just 0.66 inches thin and weighs in at 4.1 pounds. Its bigger brother, the 17 inch Razer Blade Pro isn’t that much fatter at 0.88 inches, weighing 6.5lbs. Designed for working or playing on the go, it’s aimed at both creative professionals and hardcore gamers looking for the performance of a desktop combined with lightweight mobility. Min-Liang Tan, Razer co-founder, CEO and creative director said “The Razer Blade Pro can flawlessly run the most popular creative software applications, and is powerful enough to run the most graphically intensive games on the market today; perfect for gamers, game developers, creative artists and aspiring video professionals.” 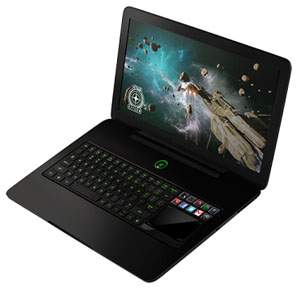 Though it’s only available in the United States and Canada for now, it gives all of us lusting for one, time to save up the sharp $2,299 recommended retail price – that’s a fair few dimes. Packed in a beautifully sleek aluminium shell, the Blade Pro is thin in size but fat in capability.