Sad to say, but I am old enough to remember watching Green Hornet when it was on the TV back in the sixties, although definitely not old enough to remember the original radio series. However, being a youngster at the time I don't remember any specific details beyond the big black car and their costumes. It wasn't until I saw DRAGON, the underrated biopic of Bruce Lee, that I was aware that Lee played Kato; although I do remember thinking he was pretty cool. 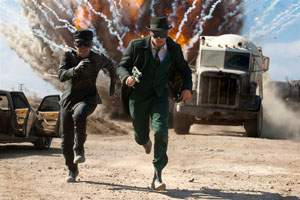 When I heard there was going to be a movie I was intrigued what they would do with it, and if it would go the same dark route as Nolan's Batman because the Green Hornet was already something of an anti-hero. There was also a connection with Batman from the Adam West series where Green Hornet made a guest appearance. Then I heard that Michel Gondry was directing and Seth Rogen was to star as the eponymous crime fighter, and it didn't square with my vague childhood memories of the character. Seth Rogen playing a bad-ass crime-fighting hero? Really? And directed by the maker of BE KIND, REWIND?

I have to say that preconceptions were dispelled when I saw it. Not because Rogen has done a Bale and Gondry has gone over to the dark side, but because they played to their strengths and adapted the characters to fit their styles and give it a totally contemporary feel. It is almost as if the 21st century incarnations of Batman and Green Hornet have swapped places with their 1960s' TV iterations.

This new movie is an origins story, and there is a lot of exposition in the first act - some of it visual, most of it vocal. It is one of the weaker parts of the film, but it is saved by Rogen doing his stoner/loser shtick, which sets the tone for the rest of the movie. Of course, Britt Reid is wealthy, in the Bruce Wayne fashion, because his dad is the publisher of the city's biggest newspaper, except young Britt is more interested in parties than papers. However, when circumstances change Britt is forced into a modicum of responsibility it is his lack of a regular cappuccino that spurs him into action that sees the return of Kato (played by Asian pop superstar Jay Chou), the until-then anonymous hired help. Naturally, there was going to be a reference to Bruce Lee secreted away somewhere in the film, and it comes early on but not in a totally obvious way. 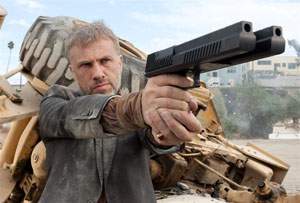 Although the movie's plot is all about the Green Hornet fighting crime with crime as he tackles the underworld big boss Chudnofsky, played with great relish by Oscar-winner Christoph Waltz (nice to see the baddy isn't English or Arabic for a change), the film is more about the relationship between Reid and Kato. The relationship does stray into bromance territory on occasions, rather than hero and sidekick, but Kato is clearly the hero as he has all the skills, not to mention charm, while Reid is, well, Seth Rogen. The pair works really well together to create great a buddy movie, and this is the film's strongpoint. Some of the supporting cast (Cameron Diaz and Edward James Olmos) are tragically underused as characters of little consequence, or simply as plot points or foils for gags.

Visually, it has its moments but, for the most part, lacks Gondry's trademark touches. Having seen it in 3D at the cinema it is actually pleasant to see it in 2D and for the most part it improves it (although there is a 3D version for those with the right, expensive eqipment. There are some scenes that were specifically designed for 3D treatment, but even those don't suffer from being flattened. In fact, it's the closing title credits that are the only thing that aren't improved by by going to 2D, which does highlight how weak the finale was. This film actually goes against standard moviemaking practice: strong opening to hook the audience, the middle bit (which can be almost anything), and strong ending, so the audience leaves feeling satisfied. It worked with SLUMDOG MILLIONAIRE. Its happy ending earned it a "feel good film" label, even though it was filled with police brutality and child torture throughout. GREEN HORNET, on the other hand puts all the comedy and action in the middle, which it does very well, but it suffers from a somewhat flaccid intro and outro.

Despite those criticisms, if you want an entertaining, angst-free hero movie that doesn't take itself too seriously then GREEN HORNET does the trick for an evening in with some beers or whatever else takes your fancy. There are loads of extras to choose from including all the usual commentary tracks, deleted scenes and behind-the-scenes stuff. On the Blu-ray there is a great feature where you can actually edit a scene that includes lots of different camera angles, sound effects and music clips.

GREEN HORNET is out on DVD and Blu-ray now and is available from Play and all good retailers.