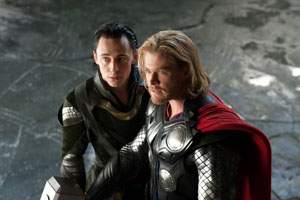 It's no big revelation to say that comics are the modern mythology, particularly the superhero ones the Americans are enamoured with. Most of the archetypes of the hero's journey, as described by Joseph Campbell in his seminal work Hero with a Thousand Faces, are present, but never more so than in Marvel's Thor.

This is hardly surprising as the comic was revisionist Norse mythology catering for an American audience. As a kid my favourite Marvel comics were Iron Man, Thor and, of course, The Avengers, with a bit of X-Men thrown in if the pocket money stretched that far.

What I liked about Thor wasn't just the fantastic tales of the Norse gods, which fired up my already fervent imagination, but the fact that frail, crippled Don Blake could transform himself into hammer-wielding übermensch. Of course something like that would appeal to any youth going through the transition into manhood.

In fact it is the basis of a lot of Marvel's most popular comics; the human who gains superpowers but still has all the human foibles to deal with.

One of the problems I have with a lot of mythologies, especially the European ones (Norse, Roman and Greek), is that they give their gods human failings, and in doing so, by bringing them down to human levels so that we can relate to them, they lose their divinity, and history shows what has happened to those once great civilisations. 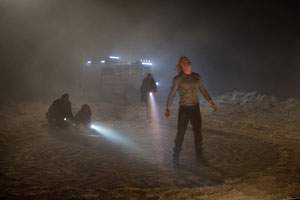 Actually, the problem came more when the humans put themselves on the same level as their gods, which is somewhat akin to the difference between the nouveau riche and the aristocracy – the breeding and culture is not there to understand the correct social behaviour.

In Kenneth Branagh's version of Thor, the God of Thunder is banished to Earth for disobeying his father Odin's wishes, although to be fair, Thor was actually doing what a warrior god should do, even if he did have a blonde moment and get fooled by his half brother Loki (the trickster archetype) into attacking the ice giants.

So, Thor lands in the US desert, stripped of his powers, looking like a musclebound surfer who took too much peyote, didn't know where he was and developed messianic delusions. This does actually supply some great moments of comedy as Natalie Portman's Jane Foster keeps bumping into him (literally) as he has to learn some humility. When I first saw this at the cinema I was really annoyed that Don Blake had been completely written out of the story, except for as a passing snarky comment masquerading as an inside joke.

Thor without Don Blake is like Hulk without Bruce Banner (although given the last two movies it might be better to have Bruce Banner film without the Hulk), or Spider-Man without Peter Parker. I understand that they are using the Ulimate Marvel universe for these movies, and are even rebooting Spider-Man into the superior Ultimate Spider-Man, but if they are trying to give the God of Thunder some humanity and humility then what better way than with the character of Don Blake?

However, watching it for a second time for the DVD/Blu-ray release, was a much more enjoyable experience. Not only was it in 2D but I was also freed from the disappointment of the lack of Don Blake. 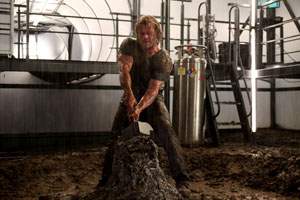 In the end, this is only a comic book movie and a good bit of "pulp" entertainment, even if it does have greater aspirations with Branagh at the helm and Anthony Hopkins in a helmet. The special features on the DVD/Blu-ray do show a lot of interviews with Brannagh, Hopkins et al talking about the process, with a lot of mutual appreciation, but like so many so-called “special features” on studio-released movies, they never really get in depth about how the movie is made, or at least nothing that is useful for people that don’t have multimillion dollar budgets to build desert towns, CGI Asgards, or dozens of variations of Thor’s hammer.

Although there is already talk of a Thor 2, this is basically another fun precursor to the long-awaited Avengers movie (all hail the magnificent one who is named Joss). 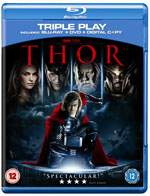 However, in terms of entertainment, it is nowhere near the level of Iron Man because none of the characters have the onscreen charisma of Robert Downey Jr, except maybe the woefully underused Kat Denning as Darcy Lewis, and a fine turn by Tom Hiddleston as Loki.

And squirreled away amongst the dozens of special features is a preview of The Avengers, which is more a run down of who will be in the film, but still something exciting for all the Marvel fanboys (and girls) of all ages.

THOR is out now on DVD/Blu-ray and is available from Play and all good retailers.

On The Weight Of The Hammer