Forty years ago, hot on the heels of 2001: A Space Odyssey, intelligent sci-fi was considered worth investing time and money in, film producers. George Lucas made his enigmatic dystopian feature debut THX 1138, pathing the way for his massive career, and Douglas Trumbull, the special effects wiz from 2001 also made his directorial debut with sci-fi ecology pic Silent Running.

Yes, even back in the late 60s and early 70s there was concern about the state of our environment. It wasn’t the hot topic it is now, as there were different agendas involved and environmentalists were mostly seen as hippies and crackpots. In fact, despite Trumbull’s best intentions in arguing the case for saving Earth’s ecology, the lead character, played by Bruce Dern in a career-defining role, was portrayed as a hippy and a crackpot who would rather kill humans that have his precious plants destroyed.

While Trumbull’s story of massive bio-domes circling the planet was presented as science fiction, scientists in both the USA and USSR were experimenting with isolated, earthbound domes to test the possibilities of creating self-sufficient environments that could be used for manned missions to Mars. The experiments were as much about the effects on humans as it was on plants, and it was all documented in the film Bringing Life to Space, which showed at SFL10.

Trumbull’s move from special effects to director, seemed like a natural progression, as it did with James Cameron, and he was able to bring humanity to both the living characters and the robotic ones. OK, given the film’s budget restrictions, the droids did look a little clunky, but this is as much to do with our perception after forty years of technological advances as anything else. At the time the film was made, Moore’s Law had only just been proposed, so even the concept of the miniaturisation of computer processors was still very much at the theoretical stage.

What does make this new HD remaster still look so good after four decades is the fact it was shot on film and all the effects and sets were practical, rather than digital, which was not even an option, bearing in mind that Tron was still more than a decade away. The massive spaceships were handcrafted models shot against starscape backgrounds, therefore reducing the need for optical composites, which tend to suffer in the HD upgrade process. All the interiors were shot on an out-of-service aircraft carrier (which bore the same name as the space ship) further adding to the reality of the film. Even the huge, white storage containers bore the logos of familiar brands such as Coca Cola and, somewhat ironically, Dow, the company that produced Vietnam-era delights such as napalm and the defoliant Agent Orange (along with Monsanto, the GM seed company). These are the companies that would have been responsible for the catastrophe on Earth that necessitated the need for the orbital bio-domes in the first place. 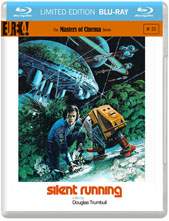 This is a sci-fi classic that has stood the test of time and looks superb on this new Blu-ray edition. There is a fascinating, contemporary making-of that goes into a lot of detail, especially about the droids. This is a proper documentary (shot on film) rather than the modern marketing fluff that appears on most DVDs these days. There are also interesting interviews with Trumbull and actor Bruce Dern. With the absence of the highly-praised Criterion Collections in the UK, and following on from the superb Metropolis, Eureka is certainly doing a sterling job of bringing quality Blu-ray packages of important classics to the home market with their Masters of Cinema series.

Silent Running is out now and available from Play and all good retailers.