The Immortals on Blu-ray 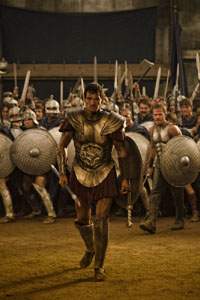 When we talk about visionary filmmakers, names such as Terry Gilliam, Guillermo del Toro, Jean-Pierre Jeunet and Marc Caro are always bound to appear because of the originality of their visual style. Indian filmmaker Tarsem Singh also needs to be included amongst them, in spite of some failings in his recent studio movie, The Immortals.

Tarsem is probably best known for his award-winning short films, or the music videos for acts such as REM and the commercials for Nike and Coke, as they are more commonly called. On the strength of his commercials success Tarsem got to direct his first feature film, the psychological thriller The Cell (2000), which starred Jennifer Lopez, Vince Vaughn and Vincent D'Onofrio. Unfortunately, the brilliant, surreal images proved too much for audiences looking for a more straightforward police procedural, and while it didn't bomb, it didn't quite get the recognition (or box office) it deserved. As he continued working and garnering awards in advertising, he was working on his own pet project, The Fall, which was finally released in 2006. It met with critical acclaim but still failed to capture the imagination (or lack of) of a mass audience. The film was filled with brilliant imagery that relied more on locations, costumes and composition than on computer generated effects. With The Fall, he had fully realised the Tarsem style. With his pet project out of the way he was ready to take on studio movies, and The Immortals was his first venture as a director for hire.

With the marketing for the film carrying the line, "from the producers of 300" (as if it was a good recommendation) it was inevitable that it would draw comparisons with Zac Snyder's Spartan "epic", although The Immortals owes as much to Clash of the Titans as it does to 300. 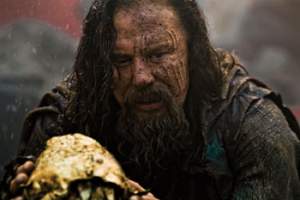 Set eons after the Greek Gods defeated and captured the Titans - making for a stunning opening shot - the power-mad King Hyperion (a suitably menacing and over-the-top Mickey Rourke) has declared war against humanity. Amassing a bloodthirsty army of soldiers disfigured by his own hand, shown in gory and eye-watering detail, Hyperion has ravaged Greece to find the legendary Epirus Bow, a weapon of unimaginable power forged in the heavens by Ares. The owner of the bow is the only one that can unleash the Titans, who have been imprisoned deep within the walls of Mount Tartaros since the dawn of time and they are hungry for revenge. Should the bow fall in Hyperion’s hands, it would rain destruction upon mankind and annihilate the Gods, who are forbidden from intervening in man’s conflict and stop Hyperion. However, a peasant named Theseus (Henry Cavill) comes forth as their only hope, in much the same way Luke Skywalker did, complete with a mentor played by an old English thesp (John Hurt). And so begins the hero's journey, that all great myths are made of, with lots of ensuing battles against the odds. 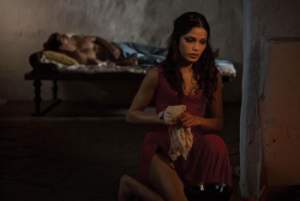 The film has plenty of Tarem's signature visual flourishes, but they are often overshadowed by excessive amounts of CGI for the digital backlots, to create scenes that would be otherwise impossible, even to the point of being physically ridiculous, such as the cliff-face dwellings. As this is fantasy/mythology it is much easier to be forgiving of these things, but spectacular scenes, epic battles and physically perfect archetypal heroes still doesn't excuse the moments of weak script and storytelling. Thankfully we are not subjected to the 3D of the cinema release, and it is actually better for it.

Unfortunately, it is something of a disappointment after the brilliance of The Fall, but I suspect a lot of the fault for that can't be laid at the director's feet. However, it is still on of the best sandals and sorcery movies that has been released in a while – Game of Thrones notwithstanding (also released on DVD on the same day. If the trailer for Mirror Mirror, Tarsem's take on Snow White, is anything to go by, there is still hope for some of his visual magic to look forward to, and it is fair to say there is magic, and it is different to The Immortals. It is also completely different to the other live action Snow White movie also due out soon. 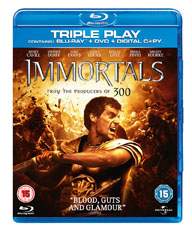 Special features are a bit thin on the ground. The DVD has a short doc about mythology, and a stack of deleted scenes, along with alternate opening scene and endings. The Blu-ray offers a bit more in terms of behind-the-scenes under the title of Carravaggio Fight Club.

THE IMMORTALS is on DVD/Blu-ray from March 5 and available from Play and all good retailers.