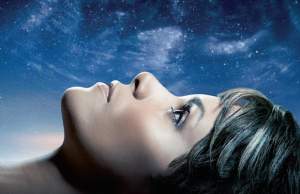 Extant is the kind of high-concept glossy sci-fi that used to be cinema’s domain - Solaris, A.I., and Moon are definite reference points - but has been increasingly seen on the small screen since the success of the new Battlestar Galactica. The smaller budgets and long-form, serialised storytelling put the characters front and centre, relegating futuristic technology and flashy special effects to the background as an everyday part of their world. Extant's pilot establishes these priorities clearly – a family and psychological thriller first, science-fiction second, with only a few hints of the outside world (privatised space exploration and a glimpse of a news report covering a power outage).

The pilot splits its time between Earth and flashbacks to Molly’s time on the space station where a solar flare knocks out the life support systems, leading to a strange encounter. While the space station is anything but claustrophobic and it’s clear she’ll survive whatever happens, there’s a great sense of tension built here. There’s no easy escape alone in space, and nothing to rely on apart from your own senses. It’s almost a shame that the series is set up to never revisit these scenes, merely to investigate what Molly experiences after the fact. How the series will tie the two stories together - that of her biological, yet supernatural, child and her psychological, yet artificial, son - has potential. In the first episode this connection proves disappointingly literal, with a reveal that the same corporate interests are involved in the robotics company where her husband John works and the space company.

Well-worn sci-fi concepts are raised, such as the boundaries between human and robot, emotions and programming, but with them comes the usual logic problems. What is the need for an emotional robot? The examples John gives (e.g. comforting a child receiving a vaccination) aren’t convincing; raising the robot from a child must eliminate the benefits of having a robot for such a job in the first place. Surely it’s partly selfishness on John’s part to create this robot child, especially when his wife doesn’t completely see him as their son, rather than, say, adopting a human child? There’s little indication this series is prepared to explore the character’s moral ambiguity and responsibilities as a creator of life in that way.

There’s a similar lack of subtlety over the Ethan the android himself. As demonstrated in Looper, Pierce Gagnon can play nuances, but Extant is more interested in simple switch flipping moments from happy and charming to quiet and creepy. The show introduces the idea of an uncanny valley of emotions rather than looks but misses an opportunity to tease it out in his performance. Halle Berry, who also co-executive produces, is given better material, and her arc across the series will be interesting to watch.

There is an excellent concept here but, while the pilot lays a solid foundation for a series, it might not end up as fresh or as ambitious as you might have hoped. The show is exclusive to Amazon Prime Instant Video, but it was made for CBS, an American broadcast network. As a result, unlike other made-for-online shows there are ad breaks, and unlike cable shows there is no blood, no swearing and no nudity. This first episode doesn’t really need that hard edge, but it might be missed later in the season.