It’s May, which means summer is nearly here – and it’s Half Term! That  means plenty of time to watch some of the great new shows premiering on Disney Channel this month. 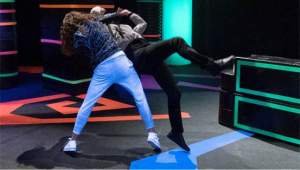 Teenage spy K. C. Cooper returns this month with four more BTVP episodes of her live action show K. C. Undercover. These BTVP episodes make up a four-part story arc entitled The Domino Effect. In the first of these episodes the Coopers track down enemy agents who are distributing weapons to enemy agencies. They capture the enemy agents, only to discover they are parents of K.C.'s classmate, Amy.

BTVP episodes of K. C. Undercover air on Fridays throughout May at 5pm. 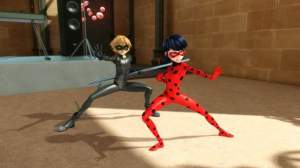 There is new animated adventure this month too, as popular series Miraculous Tales of Ladybug and Cat Noir continues, with BTVP episodes airing on Saturdays at 8.30am.

In the new episode Reverser (Saturday 26th May at 8.30am) a student named Marc gets akumatized into Reverser. Convinced that Marinette and Nathaniel made a fool of him, he’s determined to get revenge. 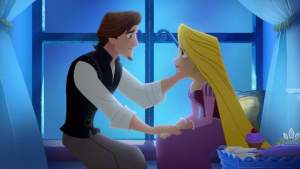 Rapunzel returns in May, with a double episode special of Tangled. A special programming event entitled What the Hair will air on Bank Holiday Monday, 7th May, from 9am, which consists of back to back episodes of the hit show.

It culminates in the special Tangled : Secret of the Sun Drop at 4pm, in which Rapunzel must face her greatest threat when Varian, desperate to save his father, takes the Queen prisoner. Rapunzel and the King must join together and come to the Queen’s rescue.

Other new programmes this month include BTVP episodes of comedy Bizaardvark (Wednesday 1st to Friday 3rd May). There are also further episodes of season two of Backstage, every Monday to Thursday from 14th May, until the season finale on Thursday 24th May at 6.30pm.

And finally, wedding bells are in the air as we celebrate the wedding of Prince Harry and Meghan Markle on Disney Channel, with a Right Royal Weekend. On Saturday 19th and Sunday 20th May, catch an all-day-takeover of your favourite Disney Channel shows with a royal wedding twist - ranging from movies like Princess Protection Programme (9am, Saturday) to shows featuring princesses such as a repeat of the recently premiered Tangled special Secret of the Sun Drop (at 2.45pm on Sunday 20th May). Also don’t miss the chance to relive the wedding of Jessie and Brooks all over again in the 4-part wedding special of Jessie. There’s more including wedding visions for Raven in That’s So Raven and K.C  protecting a prince in K.C Undercover.

This month Disney Junior is packed, as always, with new shows and old favourites to entertain our younger viewers.

Those adorable Puppy Dog Pals kick off the fun with four BTVP episodes. Fun-loving pug puppies, brothers Bingo and Rolly, have thrill-seeking appetites that take them on exhilarating adventures in their neighbourhood and around the globe. They spend their lives trying to make their master, Bob, happy as well as having fun. In the episode entitled Ol’ Snapper (Thursday 10th May at 4.30pm) while on a fishing trip, Bob loses his favourite fishing pole and thinks his trip is ruined. To get it back, Bingo and Rolly must confront Ol’ Snapper, the legendary creature of the lake.

BTVP episodes of Puppy Dog Pals air on Wednesday 2nd then 7th to 11th May at 4.30pm. 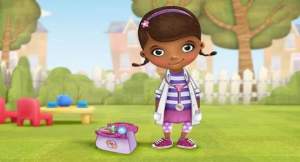 Doc McStuffins is also back in May, tending to patients in her toy hospital with the help of her medical students. In the BTVP episode entitled Hannah the Brave  (Monday 30th April at 5.45pm) four-year-old Audrey’s doll Hannah helps her feel brave during chemo treatment. Hannah gets gum stuck in her hair so she must be brave and consult Doc.

BTVP episodes of Doc McStuffins: Toy Hospital air on weekdays from Monday 30th April to Thursday 3rd May at 5.45pm.

Popular series P. J. Masks also returns to Disney Junior this month, with BTVP episodes on Wednesdays until 16th May at 4.45pm. In P. J. Robot (Wednesday 2nd May at 4.45pm) Gekko makes a new friend, a mini-robot that Romeo uses to infiltrate HQ. 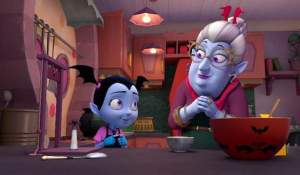 Vampirina and her friends and family fly back onto the channel in May, as she and her family continue their adventures at their very unconventional B ‘N’ B. In the episode entitled Batty Fever (weekdays from 14th to 18th May at 5.30pm) Vee's family get Batty Fever which will turn them into bats if a healing potion isn't brewed by Demi and Gregoria, the only ones unaffected. Can they save the family?

In a fun-packed month, May also sees BTVP episodes of Goldie and Bear at weekends at 8am throughout May, and of Mickey and the Roadster Racers: Chip ‘n’ Dale’s Nutty Tales at 3.55pm on Wednesdays 2nd and 9th May.

Ready for action and adventure? Then Disney XD is the place for you this May!

Spidey swings back into action again this month with more BTVP web-slinging adventures in Marvel Spider-Man. In the first of a two part story arc entitled The Hobgoblin (Saturday 26th May at 7.30am) Spider-Man takes on Doc Ock and his Sinister Five before they brainwash him and destroy New York City.

BTVP episodes of Marvel Spider-Man air on Disney XD on Saturdays throughout May at 7.30am. 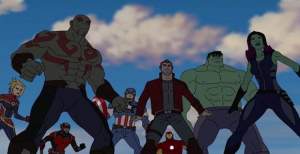 There are more Marvel-lous adventures of Marvel’s iconic super heroes in May, as Disney XD airs premiere episodes of Marvel Guardians of the Galaxy on Saturdays throughout the month at 7am. In the episode entitled Behind Gold Eyes the Guardians and Nova battle J'Son and Dark Warlock on Planet Y.

Can our heroes save their friend Warlock and the Universe before it's too late? (Saturday 26th May at 7am).

What’s more Marvel Avengers: Secret Wars  return to the channel this month, with further BTVP adventures, at weekends from 26th May at 8am.

Mech-X 4 also returns this month, with four  further BTVP episodes from season two.. In the episode entitled  Versus the Tech Army: (Thursday 3rd May at 5.30pm) a fun day with Dad turns deadly when Ryan and Mark are attacked by unfriendly tech. Spyder and Harris encounter their new enemy with disastrous results. 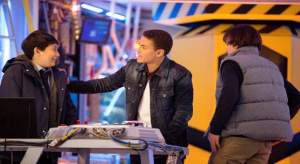 And finally, there’s an added bonus for footie fans as Supa Strikas season five continues until Wednesday 2nd May, and then is followed immediately by channel premiere episodes of season one on weekdays until Monday 21st May at 3.30pm.