Another release of HHGTTG - with lots of goodies 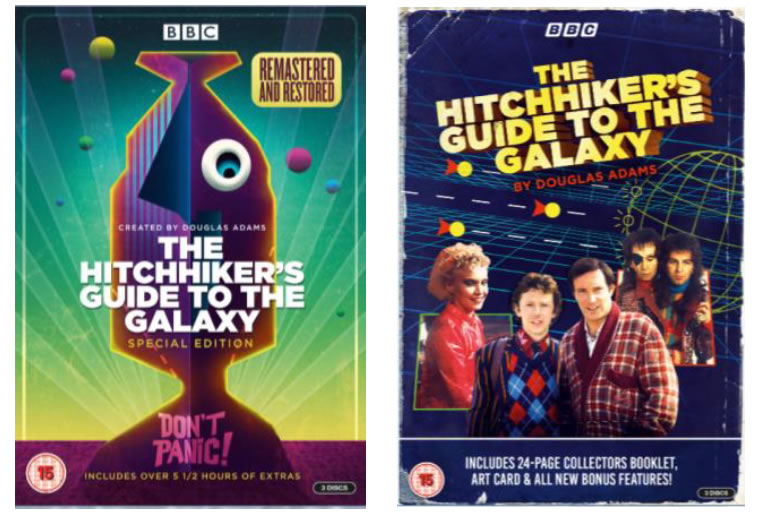 As you all know here at SFL we love Hitchhikers and Douglas Adams work.   So, whilst we mostly sigh at re-re-releases of classic TV etc, this one did get us excited.

For one thing, it's produced by Kevin Jon Davies, who has always been a friend of the festival (his kids came 2nd in the first ever 48hr film challenge btw)...   but we are also excited to have a decent BR version of the show.

This version of The Hitchhiker’s Guide to the Galaxy will be re-released on the 1st October 2018 on DVD and Blu-ray, remastered and up-scaled and with a wealth of new bonus content.

The release comes in two formats, the first a Special Edition in both Blu-ray and DVD, and the second a Collector’s Edition Blu-ray that comes in retro VHS-style packaging and includes a collector’s art card as well as a 24-page behind-the-scenes booklet written by producer Kevin Jon Davies. Both formats contain a wealth of new bonus content listed below.

Brand new ‘Special Features’ exclusive to this set include;

Recorded at the End of the Universe
Unique behind-the-scenes footage from the rehearsal rooms and the studio floor, showing the cast and crew grappling with the scenery, the props and the text of the Hitchhiker TV series.

Writing Hitchhiker’s
The story of Hitchhiker’s difficult birth, taken from exclusive interviews conducted in 2007 and 2012. Douglas’ brother James shares personal memories of his big brother back in ‘77, struggling to write at the family home in Dorset. Nick Webb, a witty, avuncular friend of Douglas’ who later became his official biographer, was also the publisher who in 1978 commissioned the best-selling novel, upon hearing the original radio broadcasts.

Douglas Adams on Nationwide (1980) The first public glimpse of the new TV series was during this Nationwide clip when presenter Sue Cook interviewed Douglas Adams.

Marvin on Blue Peter (1981) The Paranoid Android launched his 1981 bid for pop stardom on the Children’s TV favourite Blue Peter and then told the presenters how he didn’t even want to talk about it.

The Sound of Sypher (1980) BBC Engineering film - The proto-digital world of audio production is examined here in a technical explanation of the BBC’s latest SYPHER dubbing suite, featuring the BAFTA-winning sound supervisor Mike McCarthy at work on Hitchhiker.

From the personal archives of producer, Kevin Davies, featuring Douglas Adams and imagery from the TV series and elsewhere. Includes two exclusive reports on the movie from the World premiere in Leicester Square.
Tertiary Phase Trailer The surviving members of the radio cast re-assembled in 2003 for the long overdue radio adaptation of the third Hitchhiker book, Life, The Universe And Everything.

The Hexagonal Phase
Online trailer for Radio 4 - the latest (and possibly final series ever) of Hitchhiker in its original medium, is based on the 2009 novel by Eoin Colfer with snippets of unpublished material from Douglas Adams’ archives. The surviving members of the original cast plus guests such as Lenny Henry and Ed Byrne, gathered in October 2017 to record the series which premiered in March 2018 on Radio 4.