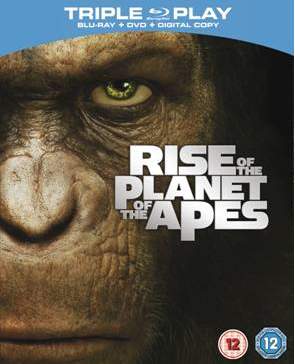 If you missed Rupert Wyatt’s blockbuster at the cinema this summer here is your chance to own your own copy of The Rise of the Planet of the Apes! The UK release for Blu-ray, DVD and Digital Download is December 12th, making it a perfect for Christmas!

James Franco stars as Will Rodman together with Freida Pinto, John Lithgow, Tom Felton and other big (names) in this sci-fi action film about a team trying to develop a cure for Alzheimer’s disease using chimpanzees as test subjects, and when one of the chimpanzees dies, leaving her baby Caesar an orphan, Will adopts him and raises him on his own. However, Caesar gets taken away and put to live in a primate facility where his intelligence advances and he becomes a leader for his fellow primates and so the rise of the apes begins.

From the Oscar-winning visual effects team behind the worlds of LOTR and Avatar, comes a CGI ape, (Andy Serkis) that brings out a dramatic performance with both intelligence and emotion, and epic battles making this Blu-ray, which is loaded with bonus materials and behind the scenes footage, a must have for sci-fi fans.

Whilst critics disagreed on whether this was a worthy addition to the franchise. We thought it was a visual feast and had some cool ideas… worth adding to the xmas wish list!