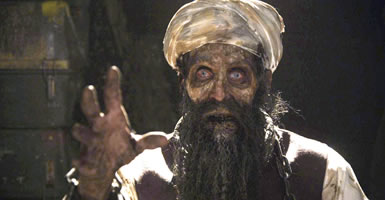 It’s been just over a year since Osama bin Laden was (allegedly) killed by US troops in Pakistan. In fact, it was three days after that first anniversary that we showed this film at SFL11, about bin Laden coming back from the dead (but no parallels should be drawn between another bearded Middle Eastern religious rebel who did a similar thing much earlier).

Osama and his zealots may believe that they were on a mission from God to improve the world, they weren’t doing it with a message of peace, love and forgiveness.

Zombie movies, which is what Osombie is, were initially social and political commentaries, and this is trying to retain that tradition and putting into a contemporary context. Whether or not you believe bin Laden was killed last year, was already dead and killing was just for political gain, or he is still alive is neither here nor there, because the truth is never likely to be revealed.

It is upon these conspiracy theories that this film is based, as Derek is convinced that Osama is still alive, despite his reported burial at sea and heads off to Afghanistan to ensure that he is definitely dead. 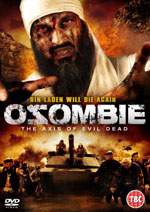 When Derek disappears, his sister sets off tot find him and joins up with a NATO Special Forces team on a secret mission. It soon becomes clear to them that they are up against more than your typical jihadists who have prefer human flesh to halal meat and the promises of paradise.

For a low-budget film that has been turned around in such a short time, this is surprisingly well made. The zombie make up and and their destruction is convincingly done. The dialogue, with its jingoist overtones, is not to be taken too seriously and is more palatable than that of the recent Battleship.

Overall, this is a lot more enjoyable than the zombie nazi film Dead Snow, which is comparable to, in historic terms.

Osombie is out now on DVD and Blu-ray and available from Play and all good retailers.