ILM have always been the go-to guys for big special effects movies. Is it because of their long heritage, from Star Wars onwards? I think it is largely to do with our long heritage. We have this whole history and culture, and what that means, when we take on a project, is you're never working in isolation; you're part of this huge culture and experience. It feels like there is this collective consciousness, this collective knowledge of how visual effects work, and it's a pretty amazing thing to be part of. Whenever we work on a movie, we not only bring to it not only the individual skills and, of course, very experienced people, we also carry with us that entire 35 years of history.

How does a Brit end up working there, when we have a very strong effects industry here? Was it your experience here that got you in? For one thing it is just the fulfilment of a childhood dream. At the age of nine I went to see the first Star Wars movie, and I was just blown away. Whereas some people wanted to be Han Solo or Luke Skywalker, I was the geeky kid who wanted to know how to create these universes and worlds. It was a dream for me, from the age of nine.

It's absolutely true that the industry in London has grown to be the same scale as the industry out here in California. I have many friends in London and they do wonderful work, and in many cases on the same level as us. That wasn't actually true when I left London. Ironically, I left pretty much on the cusp of that transition. I moved from the Moving Picture Company to Industrial Light and Magic right at the beginning of 2001, just as we were starting work on the first Harry Potter movie. It's really in large part those Harry Potter movies have allowed the London visual effects industry to grow to the scale it is now. At that time, eleven-and-a-half years ago, it wasn't like that, but I wanted to fulfil that childhood dream. And I have to say I love northern California and San Francisco, as much as I love the old country and miss it, I've got a bit soft and used to the sunshine. 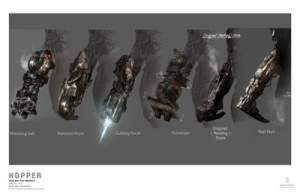 Where Britain really excelled was with practicals and miniatures. Is that where you came from or did you go straight into CGI? I'm mostly a computer guy, although, funnily enough, in a previous life, as it were, I worked at a number of things. I've worked in television, I worked at the BBC for a while I also worked in a theatre for a while as a stage hand and prop maker, so I do have something of a background in that physical production but, to be honest, I haven't brought anything of that concretely to the movies I've worked on because I'm just a computer guy when it comes to the visual effects I work on, but that knowledge and understanding of physical prop-making, lighting and set construction is super useful and is part of what helps me to be better at what I do.

Creating robots and metallic objects with CGI is relatively easy, but water, which features so heavily in Battleship, is not so easy. How did you go about working with that aspect? Water is, without doubt, one of the hardest things we do. If I was to pick out two things that are still really challenging in computer graphics, one would be faces and delivering dialogue and emotion, and the other would be water. It's very difficult. As you say, the scale of Battleship was huge, both in terms of the effects we had to create, but also the shear number of shots and the difficulty of them. One of the first things we do, when we are working on a movie, at the development stage, is to break the script down, look at the script and the storyboards, and break it down. We'd say, "These shots are easy, these shots are medium, these shots are difficult, and the hardest category we have are what we call hero shots. These are the shots that will take the very cream of the crop of our effects artists, and we give them weeks or months to develop those shots. On Battlsehip we counted about 100 of those shots, which, in an order of magnitude is more than we usually have. With the tools we had and that very limited pool of super expert people, we'd never be able to get the movie done. I spent a year with the research and development team before we hit full shot production, bringing our water system up to the next level. It's already won us an Academy Award, so it's about as good as it gets. We targeted two things; a speed increase – it now runs about five times faster than it ever used to; and it's much more robust and easier to use, the idea being that not only could we do the work quicker, but we could also use a much bigger pool of artists rather than relying on those experts - those people with the magic touch. We could actually open it up to a whole lot more artists. I had about 20 or 30 effects in my team covering these shots, and they were all able to produce amazing work. It was incredible to spend day after day in dailies (that's our morning session where we look at the work that has been generated on the computer farm overnight. I was constantly amaze with the magic the artists were able to come up with. We definitely hit a point where the whole thing became greater than the sum of the parts.

Do you think there is too much reliance on special effects? With Battleship, there were spectacular effects but the story was secondary to them in a lot of places. Yes, is the short answer. But that comes down to two things, both a holistic movie thing and purely a visual thing as well. On the one hand I absolutely agree with you, story and character should come first. If you don't have a good script, you're never going to get a good movie. You have to have a good story, and you have to have belief in that story. That's super important. But I also think it's important on the visual side to have a mixture of techniques. I think people can tell when everything is CGI. From our point of view, it's very hard to make a shot work if there is nothing real on screen to ground it. The most successful shots are those that use a combination of techniques: models, miniatures, together with CGI, to get the stuff you just can't shoot any other way. Visually, I think that is one of the things that really helps with Battleship. We didn't try and do everything CGI. We went out there and were embedded with the navy during the RIMPAC exercises. We had a huge amount of footage of real destroyers, and even the real battleship out there on the ocean. A lot of that stuff we used, not just as reference, but it's there in the movie. There are real ships and real water and stuff in the movie, and hopefully, if we've done our job right, we've woven it together in such a way that you, as a viewer, can't pick it apart. It just kind of works and fits together.

That's certainly true where the ships are being thrown around because it looks real but you know its not physically possible to do it practically. Funnily enough, the one moment where they drop anchor and do the handbrake turn, I've been told that is a real naval manoeuvre, although in real life I'm guessing it happens a lot slower than we portrayed it, but we are making a movie, so we take liberties. It was important to Pete [Berg] that he honoured the navy, and part of that was giving it a certain realism. Making sure that even if people in the navy watched the movie, they would recognise and could identify with what was going on. Generally, there is a surprising amount of realism in the way those ships work and what happens on them. Combined, of course, with crazy sci-fi, aliens and action that could never happen. On this movie, that was one of the tricks for us was walking that line between realism, making you feel like you were actually on those ships, and part of a war documentary and trying to film what's going on, together with that fantastic sci-fi aspect. That was quite a big aesthetic challenge for us.

Without all that, a film about the game could have been pretty dull. You're not the only one to think that. There were a few raised eyebrows here when we first heard we were going to be working on an adaptation of the game Battleship. Although, one of the things that gave us hope was that we had very similar feelings when we heard about Pirates of the Caribbean; that they were going to make a movie out of a theme-park ride, and that turned out to be a great series of films. When Grady [Cofer], our effects supervisor, first went down to meet with Pete, and Pete gave his pitch about the start of the movie and how he was going to take Battleship and make it into a story, that's when we started to get quite excited. We thought, "There is something here. He's managed to find something new to inject into it."

It was surprisingly clever how they got the game play in, otherwise it would have just been another Independence Day or Transformers type movie. There were some neat tricks. There was also a little homage to the pegs from the game board. I don't know if everyone necessarily got this, but the primary weapons that the aliens are flinging are very much inspired by the pegs in the Battleship game.

Battleship is out now on DVD, Blu-ray and digital download.