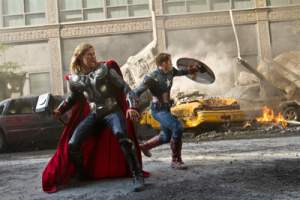 It seems a bit superfluous to write a review of Avengers Assemble for its DVD/Blu-ray release because pretty much everyone who is going to see it has already seen it in the cinema, at least once, and I already reviewed it here.

This is the comic book movie that is now the third highest grossing film of all time, which does confirm its popularity, and proves what we (the geeks) have known for a long time: Joss Whedon is a great filmmaker.

Sure, Cameron is a sci-fi nerd, but he's never really been one of us, like Joss is, and he lacks Whedon's sense of humour and fun, which is why Avengers was the hit that it was, especially when he gets Hulk to deliver the best punchline in the movie.

To be honest, I don't buy many DVDs, mainly because I get sent lots of review discs, and I have Netflix and LoveFilm online accounts, but I'm making an exception in this case, and it's not just because it is an amazing film. It's because there are a fantastic range of special features, including a great short film, that really capture the mood of the film, with hilarious out-takes and behind-the-scenes features, of which there are clips below. 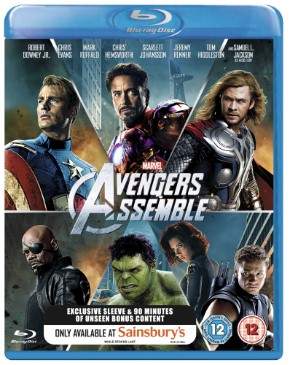 With big releases like this one, all the major retailers (usually Play, Amazon and HMV) have special offers, such as exclusive covers, metal cases, cards and so on. This time it is Sainsbury's that have come up winners as their version of the Blu-ray has an exclusive 90-minute documentary on the history of Marvel Studios, with interviews with all the major players. This is a must see for all long-term Marvel fans, and recent converts, following some rather disappointing DC movies in recent times.

Alternatively, Asda are offering an Avengers comic as part of their enticement. While, on principle, I don't agree with supermarkets selling books and movies, it seems that this time there will have to be an exception made. While I won't be picking up any groceries, I will be getting a shiny new Blu-ray.

Avengers Assemble is out now on DVD, Blu-ray and digital download.