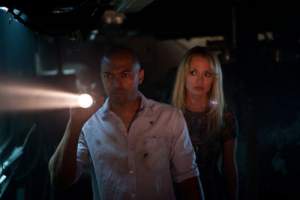 In the world of science-fiction/fantasy/horror, Britain has always been at the forefront, whether it is literature, television or cinema. We have produced innovators from the earliest days up until the present, and yet, at the moment, we don't seem to be capable of producing anything locally that can be called truly British. Any successful genre cinema that does come out of this country seems to be made with Hollywood money, although it invariably utilises local talent as we have some of the best in the world.

Noel Clarke, best known for his role in Doctor Who and his urban dramas, such as Kidulthood, seems to be trying singlehandedly to revive British indie cinema through a variety of genres. His latest outing as writer/producer/actor is Storage 24, in which he returns to his favourite genre, sci-fi with B-movie horror credentials. Still with a London setting this initially appears to be more urbane than urban, as the slightly put-upon Charlie (Clarke) has just split up with his girlfriend and he is heading off to the storage facility to divide up their goods, when a plane crashes and causes more than the usual chaos around London. With systems on the fritz, Charlie and his best friend Mark end up being locked in the storage complex, along with his ex and her friends, and sundry other people. Before long people start disappearing and turning up a lot worse for wear (and that doesn't mean drunk). It soon becomes a battle for survival against what is clearly some sort of alien monster. 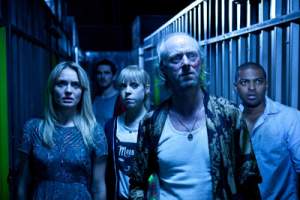 Although this film is unlikely to win any awards for originality, it does manage to incorporate all the necessary tropes without falling into cliche. However, the overuse of close-ups and shallow depth-of-field that director Johannes Roberts (who was on our BAFTA directors' panel during SFL11) employs to imbue a sense of claustrophobia is fast becoming a visual cliche thanks to hundreds of people using DSLRs to make their low-budget movies. Generally, the characters are believable and are a lot more convincing than those in the comparable Attack the Block whose characters were as much for comic effect than anything else. That's not to say that Storage 24 lacks humour, it is just aimed at a slightly older (twenty-something) audience.

Some people will be quick to find fault with this film - and it is not perfect - but the multi-million dollar Prometheus also has its fair share of script problems, and that is from one of the most highly-respected filmmakers in the world today. It is far easier to forgive failings in a movie made for a fraction of that budget (and even, reportedly, that of Attack the Block) and one that makes no pretence to be anything other than a single-location movie with a rubber-suit monster. In fact, Clarke said they had to change the ending of the movie to the existing one (which is pretty spectacular) because they didn't have enough budget for the extras and their costumes in the original finale.

Despite some of its obvious weaknesses, it is not a bad movie and far more watchable than similar films coming out of the US, such as AvP:R (2007), and eminently more entertaining than the bulk of the so-called "quality" or "gritty" British dramas that attract funding every year and barely draw an audience, such as Kelly + Victor, featuring Storage 24's Antonia Campbell-Hughes. 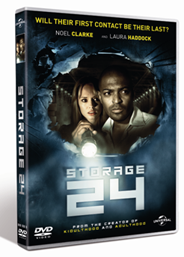 If we want to see better original British sci-fi films then we need to support films like this one and show the studios and distributors that there is a market for them out there and they will get a return on their investment, otherwise they will continue to fund and make movies that no one wants to see instead of the ones we do.

The Blu-ray has a stack of behind the scenes features, along with videoblogs from the cast, and a yack-track form Director Roberts and Clarke, who make an entertaining double act. The DVD has a reduced selection of the Blu-ray's features.

Storage 24 is out on BLu-ray, DVD and VOD from October 29