In summer 2012 there were three children's animated horror films released in cinemas: ParaNorman, Frankenweenie and Hotel Transylvania. The first two were stop-motion and the latter 3D CGI. Pixar and its superior storytelling aside, CGI animation, in general, is still struggling to match the artistry and craftsmanship of traditional 2D line animation, and the original 3D animation of stop motion, so it was pleasing to see that ParaNorman and Frankenweenie were the superior of the trio, and despite Frankenweenie having a pedigree team of writer John August and director Tim Burton, and the voice talent he attracts, ParaNorman was by far the better film. 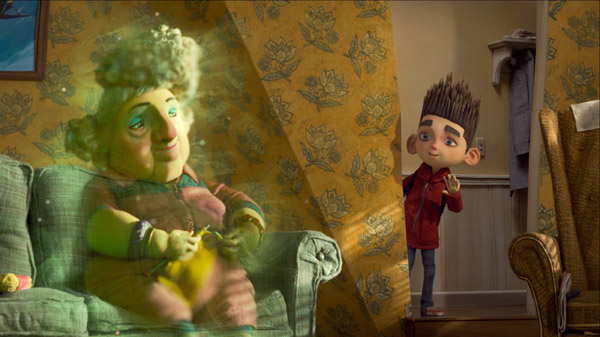 Like Cole from The Sixth Sense, Norman sees dead people, and converses with them on a regular basis. Unlike Cole, Norman is a nerd and is quite happy with his ability, and enjoys his friendship with the non-living. However, his town has an age-old curse that will bring it under threat from zombies and witches and it seems that only Norman and his geeky friends can save the day (and night).

Considering this was written and directed by an Englishman, it really captures a sense of small town America, but has the advantage of a British sense of humour and weirdness. Both ParaNorman and Frankenweenie reference classics of the horror genre, but ParaNorman is a lot more fun and avoids the darkness and self-indulgence of Tim Burton's opus. Let's face it, Burton is very much a Marmite director, whereas ParaNorman has a much broader appeal for both adults and children.

Even if 2D line feature animation has more or less disappeared from Western production houses, leaving it to the Japanese and Koreans, it is great to see stop motion is alive and well and taking advantage of the compactness, affordability image quality of DSLRs. Although it was shown in 3D in cinemas, it still works equally as well in 2D thanks to the great animation and storytelling.

This is highly recommended for anyone that loves horror films and cinematic craftsmanship, and still has a sense of fun.

If you like extra features then you'll have to get the Blu-ray (which comes with a 3D version, DVD and Ultraviolet copies). There are plenty of extras included, and I'm sure they are very good, but our review copy was the decidedly vanilla DVD. Considering the small difference in price between the DVD and Blu-ray it makes sense to go for the triple play pack.

ParaNorman is out from January 28 on Blu-ray, DVD and Digital Download.