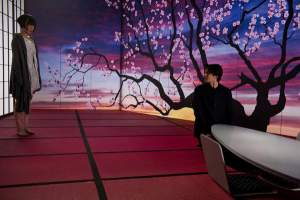 This film is a wonderful trip through the history of the world. Do you feel the same way?

JS: Definitely. It's such an exciting and ambitious project that does travel through all these vast amounts of time and to get to play a character in each one of those periods of time was a big challenge, but more than exciting.

What did you like about the story besides working with great directors?

JS: I liked that it's so vast. There's just so much going on in one story. Although it is six different stories, it does sort of weave together to tell one bigger story. So that whole idea of all these different genres actually coming together to make a whole new genre of filmmaking was amazing.

How enriching was it for you to jump from one character to another and from one era to another? I guess that's what every actor would love to do, no?

JS: It was just an opportunity like no other. You knew that there's never going to really be a film like that again. When you get to do that and get to play more than one character in one film. That's a rare opportunity.

Would you say the film explores the human condition in general regardless of ethnic origin, sexual orientation, historical period?

JS: I think it was really an ingenious idea to have all the actors play different characters because it does bring out that whole idea. It does transcend race and gender and age and all the things you were just talking about. To do that visually by using the same actors to bring that idea to the forefront, obviously that's not a concept that's in the book. I mean it's a concept in the book but it's not done by using the same characters, obviously, because you can't do that in a novel. For Lana [Wachowski], Andy [Wachowski] and Tom [Tykwer] to use the visual medium of film and actors to highlight the ideas in the book was really clever.

Do you think that film is an international language? In this case it's amazing; you get to go all over the world, different periods. You sit there and it's a great trip. Did you feel that way doing the film?

JS: What's always so great about making a film is that you get transported to whatever period of time that film is set. You get to learn about the historical background or the political background of that particular time. It's one of the great things about telling stories and being involved in filmmaking.

So are we going to see you in more Hollywood films?

JS: I don't know. I don't really see it on those terms. I just try and find interesting stories with interesting characters and wherever that sits is where it sits. I'm not really interested in whether it's a Hollywood film. I mean, this is actually a very big independent film. A lot of the money came from Asia more so than it did from Hollywood, I think. So it's kind of its own beast. I consider it to be a giant independent film. 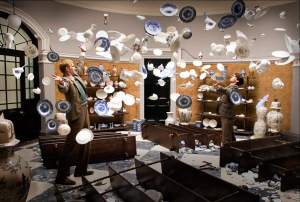 How did it feel to be involved in a film based on this wonderful piece of literature?

J D’A: I think we both felt pretty fortunate to be asked to be involved in something that obviously was incredibly daring, ambitious, courageous, unexpected and different. I think for us as actors the idea that you'd then be asked to play more than one part in that film is like, “Wow, it's Christmas. Great.”

What was it like to play so many different characters in one movie?

BW: Loved it. Actually, it can help sometimes to jump from one character to a completely different character. It sharpens both of them because the differences are clearer, aren't they? It wasn't schizophrenic, it wasn't difficult. It was just enormous fun. We were helped enormously by the fact that we had these incredible make-up designers, Daniel [Parker] and Jeremy [Woodhead] who are spectacularly creative. Costume as well, that was a huge amount of the work really.

Would you say the film is about the human condition and love regardless of historical period?

J D’A: It’s certainly one of the themes of the film. I think it's about choices and freedom and interconnectedness and so much more. One of the really nice things about talking about it the last couple of days is that people have very different views of what is important to them, but everybody's excited to have the conversation.

Was it confusing to have three directors?

This film feels like a journey through time and space. Did you feel that when you read the script and became part of this movie?

BW: I think reading the script it was harder to have that sensation of just letting it take you somewhere. It took a lot more brain activity. Whereas I think the film itself is maybe for the few minutes a little uncomfortable because nothing quite adds up, but eventually I think you get lulled into its rhythm. I love that about it. I think that's the right reaction to have.

In a way I think the historical period is not important. The important thing is that we are all human and we're all connected. Would you agree with that?

BW: I think that the film is definitely about how remarkable it is that everyone in the world is different and that we're all obviously separate from one another and individual and that's glorious. There's glorious in our particularity. But we're also all the same. I find the fact that the film celebrates that in such a playful way, lovely and hopeful, as a gift to audiences.

Cloud Atlas is available to own on Blu-ray and DVD 1st July.