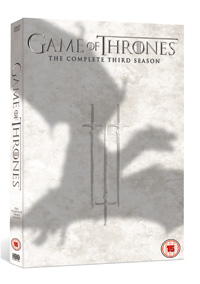 Legends and mythology were the forerunners of fantasy fiction, and it was Tolkien who, in wanting to create a new British mythology, brought fantasy to the masses, along with his contemporary CS Lewis. While the stories of Middle Earth and Narnia had a broad universal appeal, and despite their fair share of violence, they were never really seen as books for adults, and the film versions even less so.

They were relatively sanitised, with a genteel English tone to them. Of course, it could be argued that fantasy stories are for people who never grew up, no matter how old they were, but mythology is an important part of our unconscious, if Jung is to be believed - and he is certainly more credible than that shyster Freud. However, all works of imagination are, by definition, fantasy, it's just that some occur outside of the generally perceived world we agree to call reality.

Game of Thrones, does not only inhabit an imaginary world where dragons and the undead are real, as is communing with wild animals, but is also of the harsh realities of the world governed by the politics of power, greed and lust, which is what makes it such riveting viewing. Plus the fact that it is made by HBO, so it doesn't shy away sex and gore, but with enough good taste to stop it from emulating bad European films from the 70s and 80s.

There is no easy way to explain what is going on in the series, except there are lots of powerful families scheming and plotting to be the ones to sit on the Iron Throne. All are ruthless, and while there are some characters that show human compassion, they generally end up as victims rather than heroes, with one or two possible exceptions, although the saga still has a way to go yet. And unless you have been completely disconnected from the world of popular media, then the initial shock of the infamous red wedding may not come as a surprise, but it will still leave you reeling.

Game of Thrones does for the fantasy genre what Battlestar Galactica did for sci-fi, it treats its audience as mature and intelligent. It is brilliantly acted, with superb production values and excellent scripts that demand you may attention to every word and every action. Forget about Lord of the Rings and The Hobbit, this is what fantasy adventure is all about.

For those who don't have, or want, a Sky subscription, then the box sets are the best way to (legally) watch the show. And with the fourth season due to air in April, now is the perfect time to either refresh your memory or to be drawn further into the worlds either side of the great ice wall.