A central paradox of Gravity is that space is both a vast vacuum and also, inside the confines of a space suit, oppressively claustrophobic. The innovative camerawork makes full use of this – a speck in the distance will slowly grow to human size and frequently we are placed in Ryan's point of view, inside her helmet.

The 17-minute first shot even glides through her visor and into an extreme close-up of her eyes.

Alfonso Cuarón and his long-time collaborator cinematographer Emmanuel Lubezki have employed a long-take aesthetic before, in melancholic sex/road trip Y tu Mama Tambien and to navigate dystopian Britain in Children of Men, but they push it further with Gravity.

The camera spins and floats with the characters, the weightlessness of space smoothing out movements causing motion sickness, making for one of the few truly effective uses of 3D. Objects do fly at the camera à la Spy Kids 3-D: Game Over, but more often the extra dimension is used to create depth, turning the frame into a window.

While the film was post-converted the CGI which reportedly comprises 80% of the film was rendered in 3D so it's still convincing. It's a credit to Clooney and Bullock that their performances hold up so well while filming was so gruelling - Bullock was strapped into a “cage” for 10 hours a day to simulate weightless spinning.

As the opening text explains, there is no sound in space, and quite rightly all the destruction is silent. While this does undermine the disaster scenes' visceral impact, the dialogue, harsh breaths and soaring orchestral score combine to create a more subtle, eerie, sense of danger.

The silence of space is disturbing but ultimately therapeutic. Ryan's brief oases of calm between fighting for her life allow for the kind of deep introspection she'd find impossible on Earth.

But even inside the space station the peace is soon interrupted by loud fires, sirens, and decompressions. It's this oscillation that makes Gravity a great roller-coaster ride, packing in the ups and downs even in the concise 91-minute run time.

It's easy to read an anti-space exploration, possibly anti-science, spiritualist message into the film, or see it as a metaphor for human evolution (the ending especially); however it has more in common with disaster and man vs. nature films than most sci-fi, and is fundamentally a celebration of the resiliency of the human will.

While setting the whole film in space does ratchet up the tension, it causes problems for the story, and in a less immersive home viewing these flaws are more noticeable. Matt and Ryan have the sort of conversations you'd imagine taking place the first time they meet rather than when they're stranded in space together (simple things, like where she comes from).

It's also hard to swallow how unprepared Ryan is for space – she crashed the simulator every time!

You don't have to be a physicist to know that NASA don't send just anyone up there. Cuarón's symbolism, skirting close to heavy-handedness in Children of Men, is more overt here, as when Ryan floats in a foetal position and Matt literally states the theme of the film - “learn to let go!” It's likely a function of the higher budget which makes being accessible and digestible by a large international audience an imperative.

Even on a smaller screen though these are not going to be deal-breakers because the tension and the visuals propel you through the film, leaving little time for nit-picking. 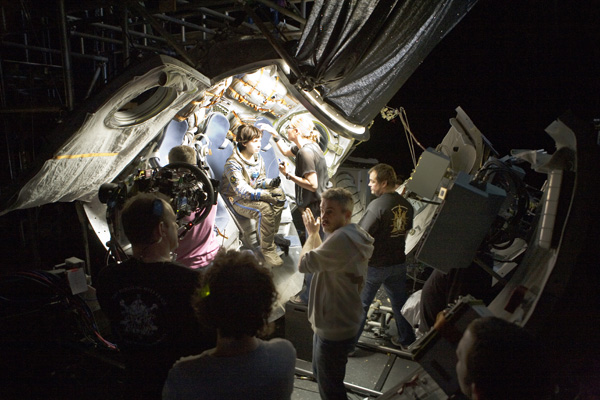 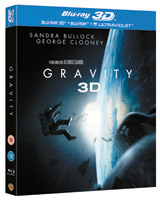 At home you'll want to see Gravity on as big a screen as possible to best enjoy the spectacle, especially if you have the 3D version. Despite stretching the story thin at times, it's still an exhilarating and breathtaking experience that manages to hold up in 2D.

The 3D Blu-ray also comes with a 2D Blu-ray and Ultraviolet version, along with almost three hours of extra features that includes the father and son team explaining the concepts behind the story, as well as plenty of the behind-the-scenes workings with the British production teams.

Gravity is out on 3D and 2D Blu-ray, DVD, VoD and download from March 3.