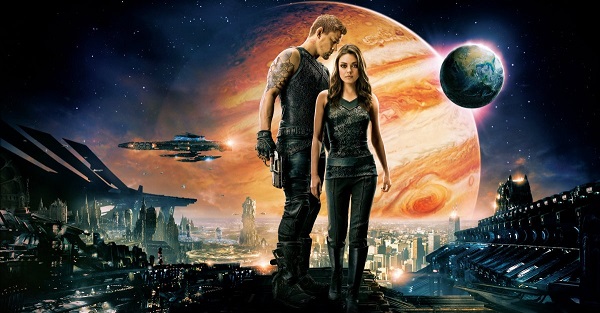 Jupiter Ascending is a visually spectacular space opera from the Wachowskis (The Matrix, Cloud Atlas, Sense8). We talked to David Vickery, Double Negative's visual effects supervisor on the film, about how some of the film's sequences were achieved.

There are a few different companies involved in the film, so could you outline which parts of the film Double Negative was responsible for?

Yes, initially the work was awarded to Double Negative and Framestore, and the basic plan was to split the work down the middle. Framestore took on a lot of the creature animation and Double Negative was tasked with the Chicago alley chase, we also did the world of the Jupiter refinery and all of the exterior shots of Jupiter. In the end, a number of other VFX facilities were involved in the show including Method studios and One Of Us. Double Negative had about 550 shots.

Were there any particular new or different challenge with this film?

There's a new challenge with every film. The Jupiter environments were a really big one for us, as well as the Chicago 'Shadow' chase, trying to realise this incredibly dynamic, aerial dogfight, incorporating the numerous capabilities of these flying spacecraft, the 'Shadows', as they duck, weave and dive through the canyons of Chicago was very complex. Just to find a way that we could go about that without resorting to a fully digital environment was a huge challenge in itself.

Then with Jupiter there was an incredibly long development process to design and create the detailed volumetric and fluid simulations of the gases. Buried deep within Jupiter's eye itself we had one of the biggest digital assets Double Negative have ever had to create: A huge refinery, protected from the corrosive gases of Jupiter by a huge superstructure called 'the birdcage'. The physical asset in real world dimensions is equivalent to the island of Manhattan, 40 km long and 15 km wide. We had to build the entire thing. 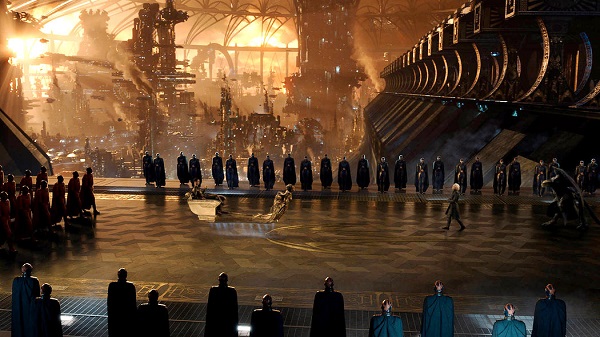 Going back to the Chicago chase, how was that achieved?

Early on the Wachowskis brought on an animation supervisor Scott Benza who they'd worked with before and he designed and directed that sequence in pre-vis. The pre-vis actually used a digital, low-res model of Chicago, so he was able to choreograph aerial battles that took place in the real space of Chicago. We took that model and retrofit it and mapped it back to Google maps of Chicago, and basically calculated the exact flight path which a helicopter would have to fly with a camera rig in order to recreate the routes the previs camera and shadows were taking. Once we worked out what those paths were, we wanted a high resolution and efficient rig to capture the photography at the highest fidelity possible. So we got in touch with a company called Pictorvision, who build helicopter rigs, and they designed a new plate that would house six Red Epics, 2 rows of 3 cameras stacked on top of each other, so we would be able to stitch the cameras back to create one single super-high-resolution, large format plate.

The result we got from that, with 20mm lenses on each camera, was a panoramic image, 12k wide, with an effective field of view of 142 horizontal degrees, 68 degrees vertical. If you were shooting that on an IMAX camera it would be roughly equivalent to a 11mm lens, but the resolution was much higher and there was much less distortion in our digital stitch. The helicopter would fly the routes at 50 miles an hour and we could take that footage and re-project it onto a model of Chicago, and then re-film it through a digital camera to create the incredibly agile movements of the Shadows. It's a 2 ½ D projection rather than a fully digital recreation of the city, so all of the interesting details, the optical effects, lighting, came for free. 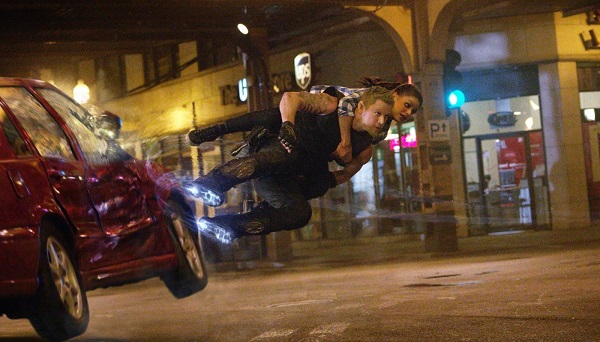 How is working with the Wachowskis? They've done films with a lot of special effects before, were they very clear about what they wanted, how they wanted things to look and feel?

They are in some respects, and in others absolutely not. They wanted to approach the film as much as possible as a non-visual effects film, to try and get and much as they could for real and in-camera. They went to incredible lengths for that. A lot of the work we had was rig removal. In terms of their creative process, they had a huge art department and a library of concept art and references that they'd collected over a period of a year while they were shooting Cloud Atlas. So often they would have incredibly detailed and specific ideas but they always encouraged additional layers of creativity, always looking for everyone to have their own ideas, fostering creative relationships as much as they can. For them there is no such thing as a bad or stupid question, every idea is welcome and they want to hear it. They feed off of that creativity to work in a very collaborative way. So it's an incredibly rewarding experience, because your voice is listened to.

With the Chicago sequence you have the real city as reference but with something like the refinery, it's all being built from scratch. Were there references, or things you drew from, to make that feel real?

The Wachowskis wanted this alien civilisation to feel like the place that human civilisation as we know it on Earth has grown out of. There were references from human architecture that we think we've originated but the idea in the film is that we've actually borrowed those ideas from the more ancient space civilisation. Space stations, oil rigs, refineries on Earth – we drew inspirations from those structures. Naval warships, aircraft carriers, any kind of large-scale human creation. At the same time, we had architectural references from Medieval times, the Renaissance period, Notre Dame. We wanted it to be a kaleidoscope of architecture, not thrown together, but to suggest that the refinery had grown and evolved over a period of many millenia. We even looked at Havana, Cuba, and the way shanty towns evolve. At the same time they wanted it to look like an ancient gothic cathedral but made of high-tech space material, to keep the viewer on edge by showing them something familiar but creating it out of an unfamiliar material.

When so many films are relying on visual effects, spectacle, is it important to keep that reference to reality, to keep things believable?

Absolutely. There's so much detail in reality. In order to make a digital object believable to the human eye, you have to pay attention to those details. And there's no way to make that up, to guess what it is about any object that makes it look real. That's what all the artists are trained to do, to study reality really carefully and learn how things are made. That's why so many of our talented artists study different disciplines – fine artists, graphic designers, industrial designers, engineers. They have a background in something that's not necessarily visual effects but they're bringing those skills to the industry and making it a creative melting pot.

Jupiter Ascending is out now on Blu-Ray and DVD.