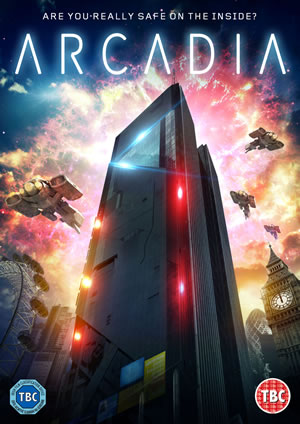 At SCI-FI-LONDON 14 we had the world premiere of a very cool thriller called BEYOND.  Now the same team are set to release their next feature, ARCADIA.

A fast-paced London-based sci-fi thriller, mixing elements of Soylent Green and Elysium, ARCADIA is an ingenious, riveting look at a not too distant future gone badly wrong, where a corrupt government runs a cruel life lottery which one man tries to smash.

In the not too distant future, the population has risen to dangerous numbers and a deadly disease has gripped the world. To combat the death toll rising, ‘Arcadia’ has been built as safe disease-free havens for the privileged, where life expectancy is more than 130 years. Outside Arcadia, the average life lasts merely 40 years - unless they can earn a place amongst the elite.

Charlie is 39 and living in London, with little time left he works every day to get him and his daughter into the safe haven. When asked to capture a government target, Adam Black, a member of resistance movement ‘Free Care’, Charlie takes this opportunity to guarantee them a place inside Arcadia. On the brink of achieving his dream, his mission takes a wrong turn and he finds himself questioning the real purpose for Black’s capture.

As discoveries are made, it seems the government have not told Charlie the full truth about Black and ’Free Care’. Facing a choice between saving his life and doing what’s right, what will Charlie decide?