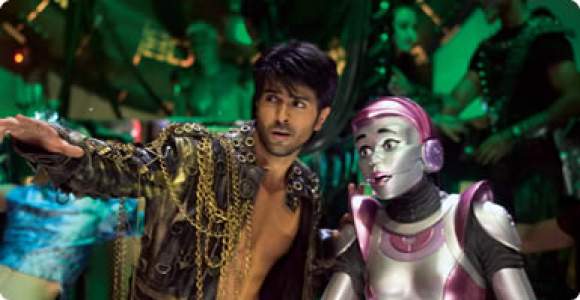 Only in India could they make a musical romance involving time travel, robots and reincarnation.

This film has all the elements that make Bollywood one of the most prolific film industries in the world, with audiences of millions: unrequited love, dysfunctional families, spectacular song and dance numbers, nasty villains, handsome heroes, and a three hour running time – and this one adds sci-fi and special effects.

Karan is the rebellious son of a rich industrialist who falls in love with Sana, who isn’t very interested in him. Eventually he wins her over, only to lose her in a tragic accident.

But she will be resurrected, so Karan’s inventor uncle uses his time machine to take him to 2050 where Sana is now a famous pop diva. Karan, with the help of a female android called QT, must win her all over again while battling the evil Dr. Hoshi. (Did we mention him? Oh well.)

If you’ve never experienced a Bollywood movie before then what better way than with this sci-fi musical extravaganza, featuring special effects from Weta.

It really is pure entertainment that has something for everyone. There will be an intermission with some free Indian snacks for you to sample.