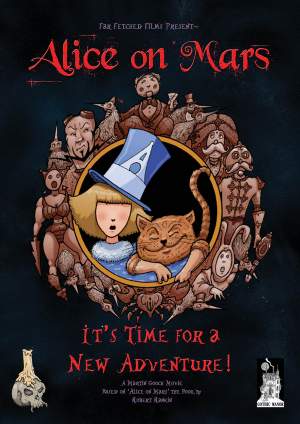 Director Martin Gooch is a good friend of the festival.  He made Death, which opened Sci-Fi London 11, our first feature film production, The Search for Simon last year, and he now has very exciting new project lined up.  He is going to be making the first (hopefully of many, many) screen adaptation of the work of author Robert Rankin with Alice on Mars!

Robert Rankin is the author of over 35 books, in his own genre of Far-Fetched Fiction (created so that he'd hopefully get his own shelf at WH Smith).  Alice on Mars is an illustrated novella, launched last year, set in a British Empire that's now making it's mark on the stars, after reverse engineering the technology left behind by the Martians after their failed invasion.

Alice (yes, the one who went to Wonderland) is now grown up and making a living training kiwi-birds for the music-hall stage.  But she soon finds herself drawn into a sinister plot on the red planet, and only she can stop Worlds War II.

This is an ambitious project, described as "Alice in Wonderland meets War of the Worlds, with a dash of Flash Gordon thrown in".  After 150 years of most Alice movies, shows etc.mostly just being telling iterations of the original stories again, it's time for an all new adventure.  It's already got an excellent cast and crew lined up, it just needs money.

The Indiegogo campaign was launched at the Sci-Fi Weekender, and is offering some amazing perks, including signed books, DVDs, parts/credits in the film, and the chance to be at the premiere and BAFTA screenings.  So what are you waiting for, pledge and spread the word right here!

And as if you needed any more convincing, here's a promo that should give you the idea of the finished product.

If this can be made before funding, imagine what a full budget can do!

P.S. We're not just supporting this because we want it for next year's festival, honest!