In total three scenes of The Amazing Spider-Man 2 were previewed, including the first 15 minutes.

The film opens with fingers on a keyboard. Dr. Richard Parker is working in the lab gassing compartments of spiders with a mysterious serum. When he returns to his computer his access has been revoked; this means trouble. Soon he's leaving home his wife, leaving their son Peter confused and alone.

On their private plane Richard Parker uploads a secret file to a server nicknamed 'Roosevelt'. Mary Parker goes to the toilet when the pilot walks in. Richard notices the “pilot” washing blood off his hands... A fight ensues, scrappy due to the confined space and disorientating in handheld 3D. Richard chooses to shoot out the window, de-pressurising the cabin, in order to gain time to finish uploading the file. The fiery plane crashes into camera.

Fade in on the Spider-Man logo. It ripples and shakes. Then a blue background fades in. We realise we're looking at Spider-Man's back as he's falling through the Manhattan skyline. This is the most thrilling part to see in 3D, the audience gracefully swinging and gliding through city streets right along with Spider-Man (Andrew Garfield).

In the process of foiling a plutonium theft, Spider-Man saves Max (Jamie Foxx), a bumbling nerd with a collection of important blueprints. Catching the last vial of radioactive material, Spider-Man is hit by a police car. He's fine though, comfortable enough stuck on to the front to answer a call from Gwen Stacy (Emma Stone).

It's Spider-Man's classic superhero work-life balance  problem – he's going to miss his high school graduation ceremony but, more importantly, Gwen's speech. (Stan Lee's cameo is here, smartly placed early in the film so viewers won't spend time anticipating it, but unlike his previous cameos he's basically playing himself rather than a defined character.) Spider-Man stops the would-be thief, dodging bullets Matrix-style, before making it to his graduation in time to bow-kiss Gwen on stage and high five an authority figure. 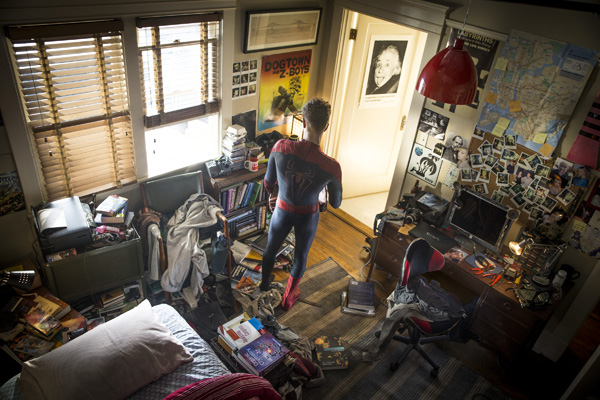 The next scene, from later in the film. Peter Parker sees Gwen Stacy across the road and crosses through busy traffic (causing at least one accident) while maintaining eye contact with her. At this point they haven't talked for a year, and Peter starts laying ground rules for their new status as friends. He wants her to have a more annoying laugh, she wants him to stop telling her she looks amazing, he wants her to stop rubbing her nose in a cute way... Gwen drops the bombshell that she is going to Oxford University, England on a scholarship. She talks about her new favourite food place, but he knows all about it even though it only opened a month ago. “Peter, have you been following me?” she asks. “Only once a day... sometimes.” Garfield and Stone are very charming together, but even they have trouble portraying stalker behaviour as a cute romantic quirk.

Meanwhile Max a.k.a. Electro (now in his blue popsicle form) is discovering his powers, and there are some cool shots of his point of view, seeing everything as blue currents of electricity. Peter senses something is wrong, and when Gwen's head is turned he borrows a trick from Batman and disappears, leaving his hoodie against a tree and his empty shoes on the ground. In Times Square Spider-Man tries to reason with Electro, but can't remember his name. Electro gets mad, even more so when a policeman shoots him and a crowd member starts filming him, the images instantly broadcast on all the screens in the square. The crowd start chanting “Spidey”, like a boxing match. 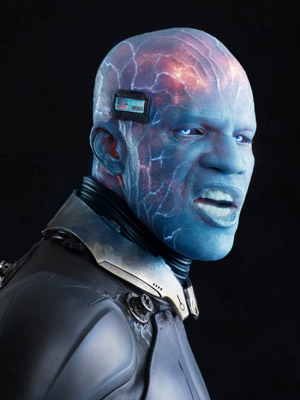 Electro shoots electricity everywhere, and again in bullet time the camera explores its path, electrifying rails and about to jump from them to people nearby. Spider-Man, reacting faster than electricity, fires his web shooter, six off at once, saving everyone. He also catches a car that's about to land on a cop. It points to a continuation of The Amazing Spider-Man's portrayal of the character as perfect. Whereas Spider-Man helped create the Silver Age of comics by being a relatable, flawed, average teenager who, through chance, is given superpowers and learns to use them for good (“With great power, comes great responsibility”), this Spider-Man is handsome, charming, witty, smart, agile, super-strong and has super-quick reflexes.

He's also, if the prologue is any indication, predestined for the role: you can't be Spider-Man, only Peter Parker can. It shuts down a big part of the wish-fulfilment that makes these characters work, similar to how the availability of the force in the original Star Wars trilogy was retconned into a genetic predisposition for midichlorians that only a few were born with. Obviously the context of the rest of the film will be important, but there's a risk here of the character coming across as intensely dislikable, or worse, bland.

Spider-Man finally defeats Electro with the help of a water-hose (yes, water defeats a man with uncontrollable electricity surging from him) courtesy of several firemen (more high-fiving) and drops down in front of Gwen. “England, huh?” When he's gone, she mutters to herself sarcastically, “Good talk.”

Finally, another scene from later in the film. Harry Osbourne offers Electro, now held prisoner, a deal and helps him escape. With the help of a handy tazer, Electro de-materialises and re-materialises outside his confinements à la Dr. Manhattan. They leave to “catch a spider”.

The Amazing Spider-Man 2 looks set to strike a similar tone to the previous film – big, colourful action with a cool, wisecracking Spidey. The 3D is fun, even if it has more of an impact on the simple swinging scenes than the action scenes themselves. While some will continue to dislike this portrayal of the character, the good news is that the Spider-Man universe is soon to expand with stand-alone films for Venom and the Sinister Six. Also, as it happens all the time in comics and is happening increasingly with superhero films, another reboot could be right around the corner.