The Amazing Spider-Man (aka No Marvel, You Can't Have Him Back Yet!) was a film with a lot of issues.  The retelling of the origin story handled pretty carelessly.  The fact it is reiterating the origin so soon after the Sam Raimi trilogy.  Inconsistent characterisation.

One of the most ugly Spider-Man costumes ever.  Well, most of the team is back for The Amazing Spider-Man 2, and while a few of these points have definitely been addressed, the film is still terminally flawed in other ways.

When we last left Peter Parker, he had settled down into his crime-fighting routine as Spider-Man, and was dealing well with his relationship with Gwen Stacy.  However, with the rise of new villain Electro, and intrigue at Oscorp, he's questioning how much danger he's putting Gwen in just by dating her.

Also, there's still the matter of the truth about Peter's parents, and new Oscorp CEO Harry Osborn, an old friend of his, having a particular need interest in Spider-Man... 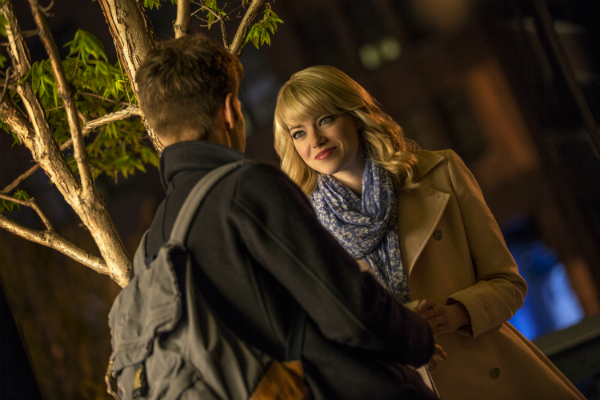 Let's deal with the positives first.  This is much better to look at than the first Amazing Spider-Man (AS-M), though admittedly the only way that one could be less easy on the eyes if it pepper-sprayed the audience.  It looks far more colourful, comic book-ish and interesting, even down to a much better Spider-Man costume, where the eyes are actually where his eyes should be rather than on his forehead.  Director Marc Webb has a much better handle on how to film action scenes this time, with some creative use of the spider powers.

Electro is an very visually interesting villain (though this version is more than a bit... reminiscent of Dr. Manhattan from Watchmen) and there are some quite well done, though slightly too brief, battle scenes against him.  Finally, the cast is strong, with Andrew Garfield and Emma Stone having decent chemistry as Peter and Gwen Stacy.

However, all of these points are purely aesthetic, on the more important script level, things may have gone back since the first.

The basic problem this film has a whole is that there just isn't a coherent storyline.  There's a lot happening in the film, but it doesn't gel together as well as it should.  Plot points don't intersect and develop well; in fact it barely counts as a story, it's more just a series of stuff happening.

What's more, some of these points are so poorly balanced in the script, you literally could lift them out of the storyline entirely, and lose nothing.

For example, remember the big mystery around Peter's parents from AS-M?  Well, we get the answer in here.

Not only is the answer really underwhelming, definitely not worth two movie's worth of build-up, it's entirely done in a subplot that never directly affects any of the other story strands. In fact, the film opens with a big action flashback with the Parkers that overall adds nothing to proceedings, begging the question what on Earth the point was.

In a film with a bum-numbing two and a half hour runtime, having a completely superfluous plotline like this is quite an issue, and it's not the only example of poor plotting. 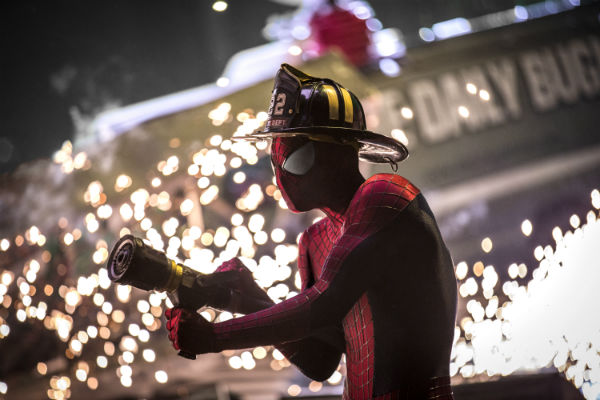 A lot of what was wrong with the first AS-M can be summed up with five words; "Let's be like Batman Begins".  Well, that trend continues in that AS-M2, as it shamelessly borrows huge amounts of plot-points from The Dark Knight, only doesn't handle them nearly as well. There's a discussion on the ethics of vigilantism (which goes nowhere), existential questions about the meaning of the hero (which go nowhere), a really rushed villain appearance in the final act, Hans Zimmer music and much more that really would be pushing this into spoiler territory.

Actually, on the point of spoilers, I wouldn't worry about this review or any other giving things away, because pretty much all the trailers have already done that.  Seriously, at least one of the trailers has the very last shot of the film on it, and others give away what were probably supposed to be major game changing moments.

Of the few things that they don't give away, if you know the comics or notice the really awkward, obvious and forced foreshadowing early on, you can see at least one other big shock coming.  Oh, and going back to the rushed villain comment, think Venom got a bum deal in Spider-Man 3?  You've seen nothing yet!

The Amazing Spider-Man 2 has pretty much all the ingredients for a fantastic movie, but it doesn't know what to do with any of them.  While Andrew Garfield and Emma Stone are good together, and good actors, the actual script and dialogue don't do them any favours.

They have chemistry in-spite of, not because of what they're saying, and Spidey's quips to the bad-guys make him sound like a smug little sod you want to punch.  Jamie Foxx is intimidating as Electro, but that's his own charisma, rather than the lack of characterisation he gets after he gets his powers (a problem Rhys Ifans had last movie too).  Dane DeHaan's storyline, from Peter's friend to arch enemy is really rushed, mainly because they forgot to establish their relationship last movie.

It also doesn't make a lot of sense when one considers the facts properly, making it seem like he went down the path of evil purely because he was just an impatient prick.  On one plus side it does seem like the filmmakers are trying for a much lighter tone, after the overly "srz bznz" solemnity last time, which is a good move.

But most of the attempts at funny scenes fall really flat, and come off as forced in afterwards, rather than coming naturally from the story, and they really overdo the "inspiration to the city" angle to an embarrasing degree.

All this basically means that as good and an improvement on the first the production values are this film, it's all for naught as the script is badly paced, non-structured and horribly characterised, making the enitrely 142 minutes wholly unsatisfying.  When you are pining for the comparatively elegant and masterful characterisation of Spider-Man 3, you know the movie's in a heap of trouble.  T

he Amazing Spider-Man 2 just makes that adjective in the title look less and less appropriate.

For the final word, here's a misquotation from Steve Martin: "By the way Sony; you know when you're telling these stories? Here's a good idea - have a POINT. It makes it SO much more rewarding for the audience!"