Richard Ayoade’s second feature, following Submarine a few years ago, is a profoundly bizarre mix of Dostoyevsky, the industrialist retro-futures of Terry Gilliam (Brazil and 12 Monkeys) and the awkward comedy that Jesse Eisenberg is known for.

According to Ayoade there’s also a little Luis Bunuel and Louis Malle in there, but it’s to his credit these influences never become overwhelming - instead they blend together to produce a unique film and a fresh tone. 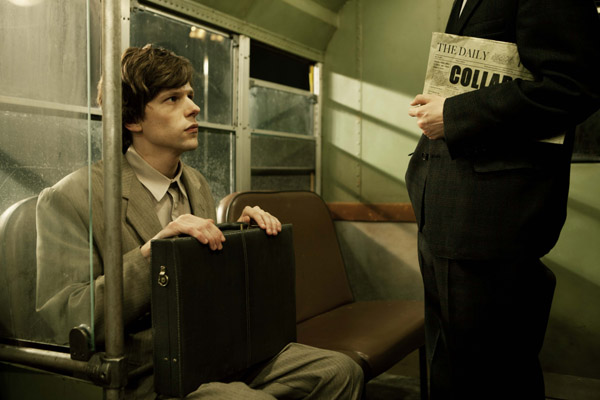 Dark, harsh floodlit streets, oppressive concrete offices and rattling trains - these are environments not out of any specific space and time but out of Simon’s obsessive, paranoid mind. Similarly, the sound design is incredibly subjective, consisting of low rumbles, groans and percussive footsteps and typewriter clicks.

We’re so used to hearing objective sound that the effect can be very unsettling, for example, when footsteps begin over one shot, continue over another but out of sync with the characters walking, and then the characters stop, but the footsteps carry on.

This is married with a dramatic strings score by Andrew Hewitt, itself occasionally broken up by other music including vintage Japanese pop, all very carefully chosen to not disrupt the timelessness of the setting. 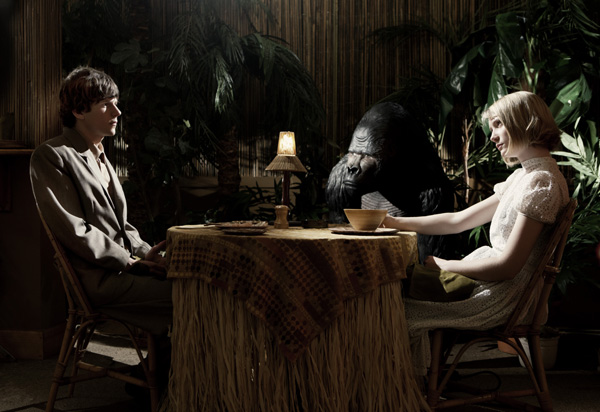 The international cast convincingly inhabit this world. Jesse Eisenberg has to play across from himself, but the way the doubling is filmed is not as challenging (or as much about showing off) as Moon, and his two personae - the awkward nerd and the arrogant jerk - fit neatly into Simon and James.

Mia Wasikowska operates a ludicrous photocopier like it’s the most natural thing in the world; as the literal girl next door she’s made an object of Simon’s voyeuristic desire and is frequently subjected to his weird behaviour, but as a content and uninquisitive member of a mad society she holds her own, offering an important counterpoint for Simon’s mania.

Wallace Shawn is, as usual, a delight, all the more so because you get the sense he’s not fully aware of how funny he is.

Ayoade describes his directing style as staying out of the way but, while there’s some truth to that, his modesty does him a disservice.

Even with only one other film as comparison, this is unmistakably his material - not only did he co-adapt the novel with Avi Korine (Harmony’s brother) but he also manages to maintain a careful balance of comedy, drama and tragedy where other directors would falter.

He also brings out the best in his collaborators and, more importantly, keeps them working towards one vision; in particular the cinematography (by Erik Wilson) and production design (David Crank, who has worked regularly with Paul Thomas Anderson) perfectly complement each other.

The Double will not be for everyone, but those who can tap into its offbeat sense of humour and relate with Simon’s sense of invisibility may just love it. Its cult status is assured.