Dawn of the Planet of the Apes

A decade after the Simian Flu wiped out most of humanity, a group of survivors encounter the new ape society led by Caesar (Andy Serkis).

Dawn of the Planet of the Apes is a powerful film about human nature, factionalism, and escalating cycles of violence. With tensions once again rising in the Israel-Palestine conflict, it comes across as remarkably prescient, only this is sadly a far too familiar story - the original franchise made clear visual associations with the civil rights movement and the Cold War. Both sides - apes and humans - consider themselves not only morally but genetically superior, justifying their actions along these lines, even when acting against their own “kind”.

There’s a slow but inexorable descent into war that is depressing but compelling, even with the foreknowledge of the other films and the title of this one.

The few characters fighting for peace - Caesar, Malcolm (Jason Clarke)- and the others who are innocent, not seeing the species divide - Caesar’s infant child, Malcolm’s son Alexander (Kodi Smit-McPhee) - are hugely outnumbered. It’s essentially the themes of the fifth film, Battle for the Planet of the Apes (1973), taken seriously and reworked with a better budget. Even the “Ape shall not kill ape” rule is reprised. 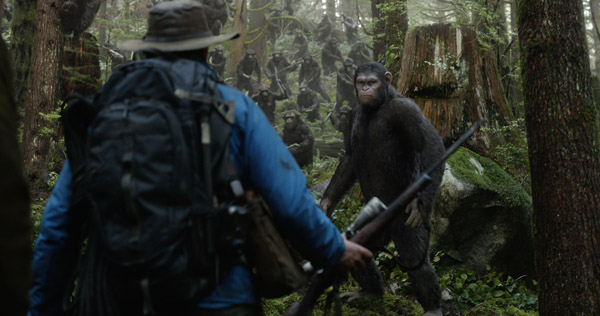 But it’s to the film’s credit that the rival leaders, Koba (Toby Kebbell) and Dreyfus (Gary Oldman) are not simplistic war-mongering villains. Their decisions make emotional sense if not logical sense right until the end. Both characters are broken, hiding their inner vulnerabilities with outwards displays of strength. The film reels you in with some awe-inspiring action imagery - apes riding horses through flames while firing machine guns - before kicking in with the heavy physical and psychological cost of war.

Every death in Rise of the Planet of the Apes was felt, had an impact; while the same might not be true here most of the violence is truly shocking, even sold only by sound effects.

It is of course also a testament to the motion-captured performances. If the trailers have seemed a little odd, or Malcolm a little dull to be the protagonist, it’s because this is mostly Caesar’s film. (The switcharoo is probably for the best - an ape drama told mostly through subtitled sign language is not the most enticing prospect.) The franchise has come a long way from the appliances of the original - while the effects still hold up, the actors’ facial and bodily movements were limited.

Here - and this is even an improvement on Rise, given the number of distinct ape characters - the apes can act completely animalistic when necessary, climbing and swinging through the forest, but when interacting they have a recognisable humanity.

Different enough to be feared; similar enough to invest in as characters. By comparison the human characters are fairly dull, with the exception of Dreyfus. With little screen time Gary Oldman is perfect at conveying the desperation of a leader who’s only just clinging on to power. 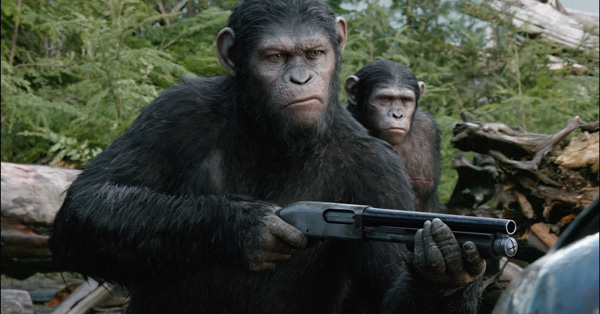 The other major contribution is from veteran Pixar and Star Trek composer Michael Giacchino. The 1968 Planet of the Apes score by Jerry Goldsmith has an avant-garde edge, and Giacchino brings some of that weirdness here. When some of the more surreal ape-centric images are paired with these strange atonal droning sounds it’s genuinely unsettling, the same way it must have felt seeing the first film for the first time in 1968, a feeling few of the other entries have recreated successfully.

He takes the task of naming tracks less seriously than composing - for example, ‘Level Plauging Field’ or ‘Caesar No Evil, Hear No Evil’. The one pre-existing song in the film is deployed at a perfect moment as a sign of rekindled civilisation.

The film was shot in 3D but it adds little to the experience. The few post-apocalyptic vistas do benefit from the depth, and the apes are particularly impressive in a way human faces aren’t due to their familiarity. However, depending on the projection, the 3D might actually detract from the film - while the brightness is meant to be corrected for the darker lenses, in some of the lower-light scenes you start losing sight of the characters’ eyes.

Dawn of the Planet of the Apes begins with the end of Rise - the ALZ-113 virus spreading through the world - but leaves the franchise in an exciting new place. Perhaps after another instalment of this quality we will be ready for another stab at the central Planet of the Apes story.

DAWN OF THE PLANET OF THE APES is in cinemas now.