While molecular biologist Dr. Ian Gray (Michael Pitt) and his lab partner Karen (Brit Marling) are getting closer to understanding the origin of the eye, he finds himself falling for a mysterious French woman Sofi (Àstrid Bergès-Frisbey) with captivating eyes.

iOrigins is constantly on the brink of collapse under the weight of its own self-importance, the delusion that it’s offering up deep pearls of wisdom. Characters flat-out stating their beliefs - “It’s dangerous to play God.” “I believe in proof.” - and a clumsy half-hearted attempt at ambiguity are a poor smokescreen for a film predicated on shoddy understandings of both religion and science and with little new or interesting to say to the tension between them. Writer/director/editor/co-producer Mike Cahill’s previous film, Another Earth, his first, could sidestep its science holes because its sci-fi device, the appearance of a duplicate Earth, was so clearly an allegory.

Here he’s attempting to portray and comment on science itself but in his vaguely mystical approach he’s failed to understand or acknowledge the fundamental difference between the belief systems of science and religion, built around evidence and faith respectively. 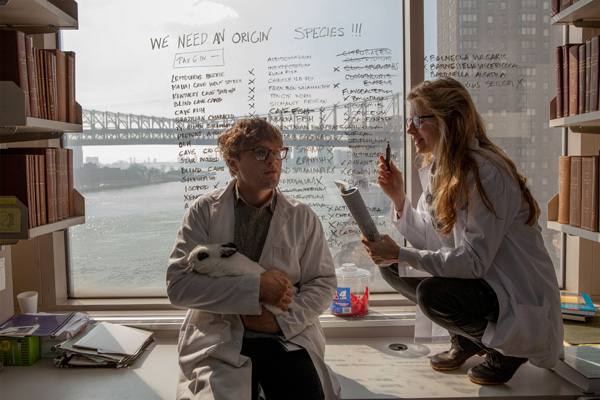 This does an incredible disservice to the characters who are either on one side or the other but nothing in between, which is taken to comical extremes. (A baby’s room designed by a scientist will apparently be entirely science themed, including molecule diagram shelves and molecule mobiles, for example.)

It’s a shame because despite the simplified science, this is a rare cinematic portrayal of scientists who aren’t concerned with solving world hunger or giving themselves superpowers but with scientific discovery itself.

Yes part of the motivation for Gray is to take one more argument away from creationists, but for the most part furthering the knowledge of mankind is treated as its own important and valuable goal.  When the characters aren’t standing on soapboxes the personal drama, mostly a strange and awkward love triangle, can be very compelling. Pitt brings an intensity to his character that underlies everything he does from his early obsession with photos of people’s eyes to his later quest for answers.

Two of the most bizarre scenes of the film are his, including one where he starts seeing the number 11 everywhere and decides to follow it/them, a moment that seems like it comes from a different more interesting film.

Brit Marling’s performances have an effortless naturalism to them and here she’s no different, not easy when her dialogue is full of jargon; Àstrid Bergès-Frisbey, somewhat of an unknown quantity (her English-language debut was Pirates of the Caribbean: On Stranger Tides in 2011), is mysterious and quirky in equal measure, although she too is saddled with clunky dialogue.

The cinematography also helps to hold everything together. Markus Förderer managed to turn a burned-up forest into a post-apocalyptic wasteland with a judicious use of overexposure in the German film Hell and here he makes each space unique and dramatic, even a space as mundane as a laboratory.

Sunny New York has rarely looked as beautiful, and it’s one of the few digitally-shot movies that looks as good as film. Phil Mossman and Will Bates provide the score under the latter’s band/music production company Fall On Your Sword, which was also responsible for the Another Earth and We Steal Secrets: The Story of Wikileaks scores, and it’s what the story isn’t: simple, elegant, and dramatic.

On the other hand, there are two Radiohead songs that the film only just about gets away with.

Despite some very strong individual elements, iOrigins never satisfyingly comes together as the thought-provoking drama it so desperately wants to be.  iOrigins is in cinemas from 26 September.