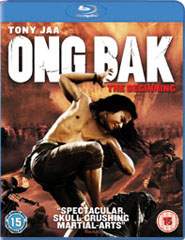 When Tony Jaa burst onto the scene with his first major martial arts film, ONG BAK, it was like a breath of fresh air. For the most part, martial arts films, such as CROUCHING TIGER, HIDDEN DRAGON, were becoming complex and highly stylised stories filled with what is known as wire-fu. These films proved a big hit with the general public, but the hardcore aficionados were hankering for the days of the raw athleticism of Bruce Lee.

This was full-contact fighting without wires or CGI. The follow-up film WARRIOR KING was more of the same, except this time object was a baby elephant and it was set in Australia, but the action was equally spectacular.

Jaa's latest film is ONG BAK 2: THE BEGINNING, which is neither a sequel nor a prequel, as such, because it is an historical action drama set 600 years ago in feudal Thailand. After his family is slaughtered, the young Tien escapes and is raised by outlaws, who teach him a full range of fighting skills. He grows to be the gang leaders favourite, and is treated like a son and heir, but Tien wants to take revenge on those who killed his parents. Given the simplicity and contemporary settings of his previous outings, this is a far more complex story, with twists and turns, of which some are more obvious than others. Like JCVD's KICKBOXER, or even KARATE KID, a lot of the film is about Tien's training and a build up to the final show down.

The film takes a while to get going as the story is unfolded, and although there are plenty of fight scenes, they are not on the scale of what we are used to from Jaa's previous films. However this is more than made up for in the finale, with his trademark moves, even if the ending is a bit ambiguous. Thankfully, this will be resolved with ONG BAK 3, which is already in production.

What is particularly surprising about this film are the production values. The sets are convincing and the cinematography and grading of the film makes it look like a big budget movie, which at times reminded me of ASOKA, with Shah Rukh Khan, and the Oscar-nominated MONGOL. For a first outing as a multi-hyphenate (writer-director-producer-stunt coordinator-star) Jaa has done a great job.

To his credit he has avoided the current fashion for jumpy camerawork and MTV editing (as seen in the recent FIREBALL), but maintained steady mid-shots so you can take in all the brutal action.

Putting someone who is essentially a stuntman, although an extremely talented and agile one, in charge of a major motion picture can be a huge gamble, but Jaa has more than proven himself to be a man of many talents and ambition; and ambitious this is. It may be a bit of a disappointment to fans of his other two films, but Jaa clearly wants to show there is more to him than sheer physicality.

ONG BAK 2: THE BEGINNING is out on DVD and Blu-ray on February 15 through Sony Pictures Home Entertainment and is available from Play and all good retailers.