What is it with Roland Emmerich? He seems to have developed his own genre of filmmaking: the worst-case scenario. From INDEPENDENCE DAY (showing at SFL9 all-nighter) to THE DAY AFTER TOMORROW to his latest, 2012, whether it is aliens, monsters, the weather or simply an ancient prophecy, it all leads to planetary destruction on an increasingly grander scale that seems to be linked into the processing power of the VFX computers.

His latest movie is based on a misinterpretation of the ancient Mayan prophecy that predicts the end of the world (as we know it) three years hence, which is caused by solar flares that are making the planet cook from the centre, like a cosmic microwave. The movie starts in the near past with the discovery of this anomaly and the governments' desperate attempts to cover it up and save their own arses at the same time. 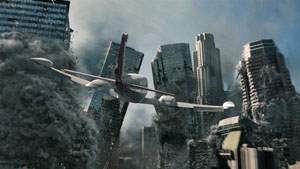 Being an Emmerich film it has a plethora of 2D characters in a 3D world: upstanding, and less scrupulous, politicians such as Danny Glover as the US President (Obama clearly hasn't aged well in the forthcoming two years), and John Cusack as the everyman hero with an estranged wife and two kids. Chiwetel Ejiofor is the scientist with a conscience and Thandie Newton plays the love interest, with Woody Harrelson as the slightly crazy conspiracy theorist. The characters, with their one degree of separation, and their fates are all predictable from the outset, as is that of the world - in a TITANIC way. But who watches an Emmerich film for in-depth character development? It's all about the special effects and to be fair, no-one does mass destruction like Emmerich, and he and his team, have really excelled themselves this time. I'm sure he is very serious and earnest about what he is doing but I have to say I laughed most of the way through this movie. The stretch limo outrunning the collapse of California (preceded by Arnie assuring the citizens everything was going to be all right) was equal to anything from the best of the Warner Bros cartoons with Road Runner and Coyote, except with far more sophisticated animation. 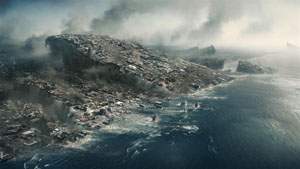 While the movie had a predictable painting-by-numbers (mostly ones and zeroes) screenplay, it was still an entertaining popcorn movie that is enjoyable if you watch it with a massive suspension of disbelief (although he lost me when the Italian leader opted to stay in Rome and pray at the Vatican rather than escape inevitable doom), not only for the onscreen drama, sentimentality and narrow escapes but also for the rather pessimistic view of the Mayan prophecy.

The general consensus is the prediction is about the end of the world as we know it, which isn't the same as the destruction of the planet, but with a massive change in consciousness, which is already happening. We are already seeing the greed of the financial sector, multinational corporations and corrupt politicians being exposed and starting to crumble, and a greater interest in unity and co-operation to try and correct the mess we have got the world in to. Without wanting to sound too "new age-y", we are entering a time of great change and it is all going to be for the better, no matter what Hollywood or the doom-and-gloom merchants think.

Extras: Nothing as spectacular as the movie, with some fairly standard behind the scenes and a cursory look at the Mayans.

2012 is released on DVD and Blu-ray through Sony Pictures Home Entertainment and available from Play and all good retailers.