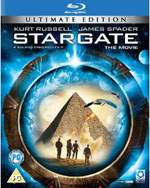 The movie that launched hundreds of hours of television is out now on Blu-ray, and coincides with the release of director Roland Emmerich's latest epic, 2012. It is interesting to compare and contrast the two movies of this modern-day sci-fi Cecil B De Mille. While Emmerich relies heavily on CGI in his recent efforts at global destruction (thank the gods), his earlier opus was very much a case of a cast of thousands and massive sets and location shoots.

Although the CGI in 2012 is impressive, it does tend create a cartoon level of action, such as the stretch limo outrunning an earthquake and the destruction of California. However, with constructed sets there is an added reality that makes the story just that more believable, no matter how fantastic it is. 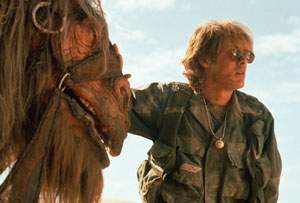 STARGATE's story, undoubtedly influenced by Eric von Daniken's Chariots of the Gods, does not really need recapitulating here, as it has been around for long time, evidenced by the thin, young James Spader.

Surprisingly, the film hasn't dated badly and the Blu-ray transfer is surprisingly good, which can't always be said for older movies.

It also comes with both the theatrical and an extended cut, along with a fairly decent collection of special feature including a fun, on-set gag reel, and a French-made making of doc that has all the interviews in English but the film clips are dubbed into French with English subtitles, which is a bit surreal.

If you are a fan of the various TV series based on the concept created by this film and, for some strange reason, don't have it on DVD then this Blu-ray Special Edition is certainly worth adding to your collection, otherwise if you already have the DVD and an upscaling DVD player for your HDTV, it doesn't really offer significantly more for the cost.

STARGATE Special Edition Blu-ray is out now and available from Play and all good retailers.