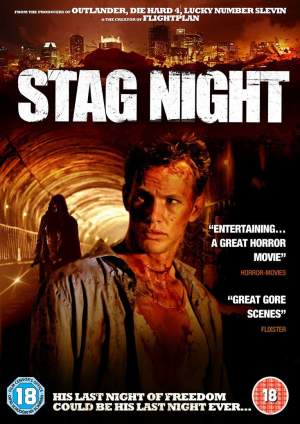 I honestly don’t know where to start when thinking of the horror of STAG NIGHT. Part of me wishes that instead of the film ending when most of the cast had died, that maybe it could have gone on a little longer until some of the production crew die as well, thereby ensuring that films like this don’t continue to get made.

I suppose the film mostly suffers because of the script. Being that all I watch is horror films I do see quite a lot of stories being repeated, and this is no exception. The problem is that it takes a fairly mediocre story line and then also makes it overly simple to the point of being stupid.

The film centres on a group of men out in New York City celebrating the night before Mike (Kip Pardue) gets married. After picking a fight in a strip club they decide to get the subway and head off to another bar. Unfortunately for everyone (including the audience) they get into the same carriage as two of the strippers from the bar they were just in. Tony, the sex pest of the group (played by Breckin Meyer), decides that being subtle about his intentions towards Britt (Vinessa Shaw) is probably not the right approach and after he is maced in the face the group pry open the train doors and find themselves alone on a disused platform in an old subway station. With no mobile phone coverage and no easy way out, they decide to brave the tunnels (with horrific consequences) that lead to them running for their lives for the duration of the film.

Admittedly, there are some good moments of gore, but the shear stupidity of the characters' actions makes the whole thing feel like a waste of time. STAG NIGHT isn’t the worst horror film to ever be made. I do think that if it was a little worse it might be able to gain some cult-appeal. What it is, if anything, is fairly unmemorable, except for the bits that are infuriating.

After sitting thought the whole film I was hugely disappointed to find out that the ending was the worst bit. If you are desperate to combine your love of horror films with your love of public transport systems then there are better films you could pick than this.

STAG NIGHT is available now on DVD and Blu-ray from www.play.com