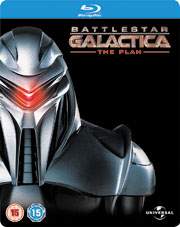 Of all the long-running sci-fi TV series to date, Battlestar Galactica has to one of the best, if not the best. Fans of Stargate and Star Trek and their various incarnations will no doubt argue against that, as would the fans of Babylon 5. However, in terms of an ongoing human drama that didn't rely on alien-of-the-week, or any aliens at all, and managed to address politics and religion with a contemporary context, and include some kick ass space battles, it really is hard to beat. When encouraging my non-sci-fi friends to watch it, I invariably described it as West Wing in space.

What it also has in its favour is the show's creators decided to run it for four (or five – depending on your POV) seasons, so rather than running for years and years with increasingly thin or improbable storylines, it would come to a satisfactory conclusion. Whether it achieved that in the final episode is open to some debate, but it was resolved in the way the writers and producers wanted it to, rather than being axed mid series like some other great shows such as Firefly and Odyssey 5.

The producers even managed (so far) to avoid the inevitable cinema movies, although they did produce a TV movie, Razor, which covers some back-story between seasons three and four. It was released on DVD and included in the recent release of the complete series DVD box set and the recently released Blu-ray version. After the show had finished, another TV movie was made, called The Plan, but it is a bit of an anomaly. Where Razor fitted in between two seasons, The Plan covers the entire series, chronologically slightly pre-dating the mini-series and going through until almost the finale. What makes it different is it is told from the point of view of the Cylons, and as such should only really be watched by those who have watched the whole series because, from the outset, there are blatant spoilers that will ruin nearly all of the most powerful dramatic reveals in the series. However, if you know these reveals and which characters are the hidden Cylons, The Plan loses too much of the impact that the show gave. The film has plenty of action and fills in lots of details and motivations on the part of the Cylons, but it lacks any of the real dramatic pace of the series.

What is interesting is that a lot of the scenes were clearly shot at the time of the original series, which begs the question; were they always intended to be used even though they were excised from the final cut? This is definitely one for Galactica completists and hardcore fans, although they may be a little disappointed with its pacing and structure. However, I reinforce that it should not be watched by anyone who hasn't seen the whole series because not only will it not make any sense it will spoil the whole series.