Anyone who has bought a new computer or mobile phone only to find a faster more featured packed version coming out days or weeks later can tell you, science and technology are developing at a scary rate. In the world of science some of it can be truly scary, especially when real science is advancing so fast that it is outstripping fictional and speculative science, as Vicenzo Natali discovered when making SPLICE. 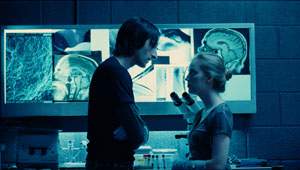 One of the contributing factors to this is on the one hand you have the pure scientists, the geeks, whose only interests are exploring the world and its possibilities through research, all of which needs funding that governments are no longer willing to support - unless it has a potential military application. Then you have pharmaceutical companies that want to instigate and exploit scientific research for profit, even to the extent that they will retrospectively invent medical conditions for the compounds they develop or discover. It is in an environment of a corporate funded laboratory that the story of Splice is initially set. Clive (Adrien Brody) and Elsa (Sarah Polley) are the superstar wunderkinds of genetic engineering, who specialise in DNA splicing – the joining of genetic material from different species to create new hybrids. However, their work goes far beyond making more resilient soya bean crops. They want to mix human and animal DNA to find new cures for diseases. Although the pharmaceutical company funding the research is desperate for results, and a certain amount of success has already been achieved with mixed animal hybrids, they are not ready for their star couple to use human DNA.

Clive and Elsa are driven to succeed in their research, not so much because they want to please their backers but because they want to see the results, although there is financial pressure to deliver. In order to overcome an inherent defect in their research to build the required genetic string, Elsa introduces some human DNA into their own secret project, which results in the “birth” of a creature that they call Dren, which starts to show unusual intelligence. While Elsa loves the creature like a daughter, and Clive loves it in his own way, they have to keep Dren hidden from their employers and the general public, for their own safety as well as that of Dren. The creature starts to grow into a recognisable hybrid of animal and girl, and eventually into an alluring and unusual young woman, who still has a final metamorphosis to make. 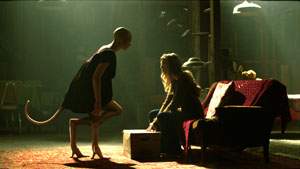 Writer-director Vicenzo Natali is a smart, and funny, filmmaker - CUBE, CYPHER, and NOTHING (not released in the UK) – and has created what is pretty much your basic monster movie, in the vein of FRANKENSTEIN, that also explores other themes such as medical ethics, parenthood and the clash of nature versus nurture. The movie approaches the science with just the right balance of realism and fiction, a boundary that is rapidly blurring in the real world, and it is used to set up the story but isn’t its main focus. The familial aspect of the movie is very interesting and brings up the issue of caring for a "special needs" child, although this one can fly, live under water and has a taste for raw flesh coupled with a burgeoning sexuality.

For a sci-fi film that is covering so much ground it manages to maintain a good balance of science, human drama, humour and horror, particularly in the final act. However, it will not appeal to everyone and certain aspects may even annoy hardcore genre fans because of the different strands and themes, but that diversity will also make it more palatable to a broader audience.

The DVD/Blu-ray release adds some good special features. There's a long interview with the director, which does become a little boring as it is a static shot of the director answering questions that are written on screen rather than a conversation with an interviewer. That does not mean that the content is not interesting, it is simply not presented in an engaging way. In contrast, the making-of/behind-the-scenes features, of which there are two, are far more interesting than the usual self-congratulatory, mutual appreciation fluff that comes on studio DVDs. These show the nuts and bolts of medium budget indie filmmaking without glossing over the less pleasant parts of the filmmaking process, such as the fake-blood-splattered extras waiting to be cleaned up.

Top movie from a friend of the festival, with great special features.

SPLICE is available now from Play and all good retailers.