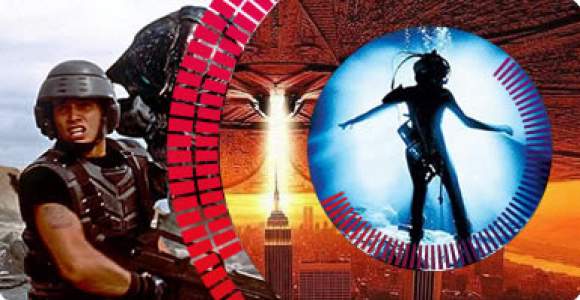 In anticipation of Blizzard’s release of STARCRAFT II – The Wings of Liberty, the PC based strategy game, we have put together a few movies with mecha, monsters, aliens and some great macho dialogue…

Join us in the bar from 10.30pm and play a beta version of the game then grab your goody bag and kick-back for a night of kick-ass! Complimentary Purbeck Ice-cream, energy drinks, tea and coffee and a few special give-aways on the night.

(1996, Roland Emmerich) The question of whether we’re alone in the universe is finally answered as enormous UFO ’s appear over the earth. Can Will Smith save the world again?

(1997, Paul Verhoeven) The only good bug is a dead bug! Join the mobile infantry or face extinction.

You are the Earth’s last and only line of defence. Would you like to know more?

(1989, James Cameron) A civilian diving team are enlisted to search for a lost nuclear submarine and face danger while encountering an alien aquatic species. Wonderful film! This is the special edition version.

(1995, Christian Duguay) It is 2078: On a distant mining planet ravaged by a decade of war, scientists have created the perfect weapon: a self-replicating race of killing devices known as Screamers designed for one purpose only - to hunt down and destroy all enemy life forms.