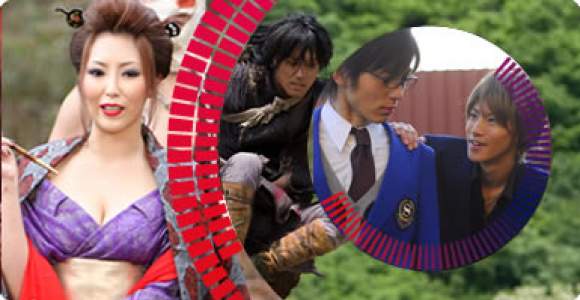 Not only do we have 4 cracking Animé features on offer, but 4 amazing liveaction movies to keep your blood boiling. Set piece fight scenes, swordplay and nudity, what more could you want.

(Japan 2009) Lili, heir to a famous master swordsman celebrates her 20th birthday. During the ceremony she is mysteriously transported back in time to a small village in 18th Century Japan! The village is suffering at the hands of an evil geisha and her wicked army of bandits.

(Japan 2010) Fujiwara is doing well in high school, he is good looking and also a good fighter. One day, he is attacked by a group of students without provocation. He discovers a mysterious violent game being played out in the corridors and playgrounds of Tokyo’s high schools.

(Japan 2009) Whoever kills Tajomaru inherits his name, status and sword. A Royal leaves his kingdom to protect the princess he loves, only to become the bandit TAJOMARU.

(Japan 2009, Dir: Yoichi Sai) It is 17th century Japan and Kamui is a fugitive Ninja on the run. He despises the lethal laws of the Ninja where he must use his skills to kill others, and is in search for true freedom.